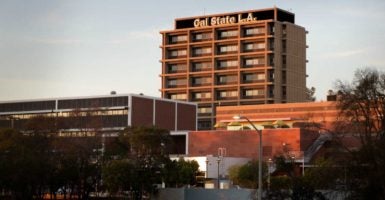 A California university has changed its policies regarding free speech after being sued by Young America’s Foundation and conservative speaker Ben Shapiro.

The lawsuit, which was filed by attorneys from the Alliance Defending Freedom, came after a Shapiro speaking event sponsored by Young America’s Foundation and organized by its affiliate organization, Young Americans for Freedom, was nearly shut down at California State University-Los Angeles.

The specific changes the university made include not charging extra fees for conservative speakers, not denying speaking events due to the ideology of a speaker, and carrying out administrative policies in regards to campus events in an unbiased way, reported Young America’s Foundation.

ADF Senior Counsel Tyson Langhofer, the attorney who argued the case on behalf of Young America’s Foundation, said in a statement that “Cal State-LA’s acknowledgment that the university can’t charge fees for speech it labels ‘controversial’ is a recognition that the prior policy violated the students’ freedom of speech. The university’s changes should enable students to organize future events in a safe and civil environment.”

Shapiro and the Cal State-LA chapter of Young America’s Foundation had several run-ins with university officials early last year. After Shapiro announced he would be giving a speech on campus, the school charged organizers with a $621.50 security fee. When that did not stop them, the university president, William Covino, attempted to cancel the event, to which Shapiro reportedly replied, “Screw them, I’m going anyway.”

Protesters assaulted, harassed, intimidated, shouted down, and berated event-goers … One attendee claimed that he got ‘punched in the ear’ by a protester. Another man, who is disabled, was pushed and kicked multiple times. Before the speech began, members of the school’s black student union reportedly assaulted Breitbart journalist Adelle Nazarian.

The Young America’s Foundation chapter at Cal State-LA has since successfully invited a number of conservatives to campus, according to Brown. Following the changes made by the university, Shapiro tweeted at the university:

“As a result of this victory … @csulayaf will be organizing a return to their campus by @benshapiro.” https://t.co/frn29zAtuj

“Last year’s near-riot at Cal State-LA was a travesty with regard to free speech. I’m excited that we were able to come to an agreement with them to protect free speech in the future, and I look forward to coming to the campus soon to speak again,” Shapiro said in a statement.

“Hopefully this time, we can have an honest, open, and productive discussion rather than violence and chaos from those who disagree,” he added.