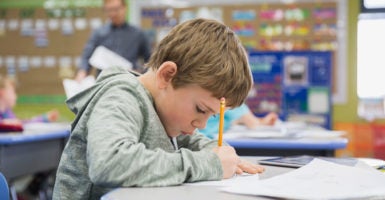 A 2009 study of charter schools in New York City found that students outperformed their district school peers in math and reading.(Photo: Getty Images)

When Morgan Waldrop started high school, academics weren’t much of a priority.

“It wasn’t even a goal of mine to be at the top of my class,” Waldrop says. But when she became pregnant, her goals changed.

Starting in her junior year, Waldrop switched to Odyssey Online Learning, a virtual charter school in South Carolina. The flexible schedule allowed her to care for her baby and stay on top of her studies.

“I locked in when I got to Odyssey,” she says. “It was exactly what I needed.”

Around the country, 7,000 charter schools–public schools that typically operate independently from traditional school districts–are serving students from all walks of life and make up the fastest-growing sector of our nation’s public school system.

Charter schools have the flexibility to offer unconventional teaching methods without the bureaucratic oversight of traditional districts and burdensome teacher-union contracts. In exchange, these schools operate with more transparency to parents and taxpayers. State officials can close charter schools that don’t meet academic goals or show clean financial audits each year.

These learning options have attracted the ire of unions. A recent Wall Street Journal column by a teachers union member in Los Angeles claimed charter schools’ success is an illusion because they have “admission policies [that] exclude low-performing students.”

That was not the case with Waldrop’s charter school. Of her situation, Odyssey’s principal said simply, “With all of our students, life happens.”

Other charters have waiting lists and must admit students by lottery. New York City’s charter school lottery was made famous in the 2010 documentary “Waiting for Superman.”

These schools are helping students across the U.S. A 2009 study of charter schools in New York City found that students outperformed their district school peers in math and reading. Researchers found similar results in Boston among charter schools that admit students by lottery.

The Journal columnist claimed district schools need more money to succeed, but the charter school student achievement described above came at a discount.

In large cities such as New York and Los Angeles, charter schools receive an average of $5,800 less per child than district schools, according to a recent University of Arkansas study. In fact, in The Journal contributor’s home city of Los Angeles, the funding gap between traditional schools, and charter schools widened from 2003 to 2016.

A survey that has tracked public opinion on parent choice in education for more than a decade finds increasing support for charter schools. Interestingly, this year’s survey found a sharp increase in the support from teachers.

As for Waldrop, a charter school offered her a second chance, and she grabbed it. Union leaders should stop throwing stones at charter schools and join in the applause for any school that helps students succeed.