How Teachers Unions Are Holding Children With Special Needs Hostage 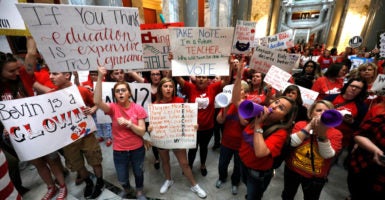 In the wake of strikes last spring—which, then as now, included teachers unions in Kentucky and West Virginia—lawmakers gave in to union demands, agreeing to raise teacher salaries and even increase taxes in some states in order to spend more on government schools. Pictured: Kentucky public school teachers protest outside the Kentucky House chamber, April 13, 2018, in Frankfort, Kentucky. (Photo: Bill Pugliano/Getty Images)

Teacher unions are now using strikes as a form of extortion.

For the second time this year, a state’s teachers union and its members have closed schools and are refusing to work until lawmakers stop considering proposals to give students with special needs more learning opportunities.

In recent days, the Kentucky teachers union, and administrators and teachers, in Jefferson, Bullitt, and Oldham counties closed schools and protested at the Capitol chanting “Teachers vote!”

Their opposition is to a proposal that would allow some K-12 students in Kentucky—including children in the foster care system and children with special needs—to access scholarships to attend private schools.

Unions, district administrators, and teachers are no longer just demanding higher pay, the issue at the center of the strikes and school closures in 2018. Now, they want to run the Capitol.

Kentucky teachers from the state’s largest district, Jefferson County, are making demands in spite of years of critical reports about district operations. The Louisville Courier-Journal reported three years ago last week that Jefferson County was grossly underreporting the number of times it physically restrained children with special needs.

It reported that the district drastically underreported the number of times children with special needs were “physically held down” or “confined to a room.”

The newspaper said that district records showed officials used physical restraint or removal on children with special needs some 4,400 times, but that Jefferson County Public Schools only reported 174 cases.

At one school, reporters found that “school staff slammed students’ heads into walls.”

District board members and national advocates for children with special needs said they were shocked by the scope of the findings.

The Courier-Journal reported problems were continuing as recently as last month.

It should be no wonder, then, that lawmakers are considering providing children in the state with more school options. And as more of the Jefferson County Public Schools’ woes are made public, parents should be demanding nothing less.

As if that weren’t enough of a problem, Jefferson County Public Schools have struggled to bridge a yawning achievement gap between minority students and their peers.

The Bluegrass Institute’s staff education analyst, Richard Innes, looked at Kentucky’s progress on the National Assessment of Educational Progress, often called “the nation’s report card,” and didn’t like what he saw.

“Based on Kentucky’s performance so far, it will literally take several centuries for the state’s black students to reach a reasonably high rate of proficiency on NAEP reading assessments in both the fourth and eighth grades,” Innes says.

There are also reports of indefensible overhead expenses. As research by The Heritage Foundation reported last year, a 2014 audit found Jefferson County Public Schools had 150 central office positions making $100,000 or more annually, a figure that far exceeded other districts of similar size around the country.

A 2018 management audit of the district said there is “a pattern of a significant lack of efficiency and effectiveness in the governance and administration of [Jefferson County Public Schools].”

These strikes are part of a disturbing trend. About two weeks ago, the West Virginia teachers union and its members refused to work because lawmakers considered a proposal that would have allowed for the creation of seven charter schools in the state and 1,000 education savings accounts.

As in Kentucky, children with special needs would have been among the beneficiaries of these new learning opportunities.

In the wake of strikes last spring—which, then as now, included teachers unions in Kentucky and West Virginia—lawmakers gave in to union demands, agreeing to raise teacher salaries and even increase taxes in some states in order to spend more on government schools.

Yet state legislators did not ask for anything in return. Such inaction is remarkable considering the disturbing Jefferson County Public Schools audits in Kentucky, or the examples researchers found of vacant and underused school buildings that districts left open at taxpayer expense in states such as Arizona and Oklahoma.

It should come as no surprise, then, that unions are closing schools and refusing to work again this year—this time in an effort to intimidate lawmakers into abandoning certain education policy reforms.

It’s a tragedy that children with special needs will be losing out.

Lawmakers need to remember that they represent the children and families in their states—along with the unions and their members who are breaking the law by going on strike.

State legislators should point to the waste and inefficiencies in places such as Jefferson County Public Schools and say families at least deserve the option to choose where and how their children learn.

Before deliberating over spending increases, lawmakers should at least call for school district leaders to improve district operations and eliminate waste.

Until that happens, teachers unions will continue to be the schoolyard bully.