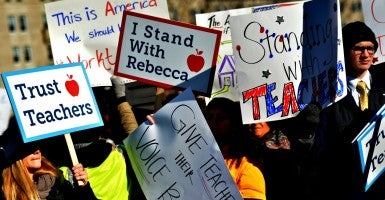 It is the end of the road for Rebecca Friedrichs’ challenge to the requirement that teachers who opt out of union membership must nevertheless pay fees to the local union for a “fair share” of the costs of collective bargaining. In Friedrichs v. California Teachers Association, the Supreme Court announced in a one-sentence opinion that the lower court judgment was affirmed by a vote of 4-4.

A group of teachers from California, led by Friedrichs, argued that forcing them to subsidize the costs of collective bargaining over public employees’ salaries and benefits (which is inherently political and indistinguishable from lobbying) violates the First Amendment.

In a 1977 decision, Abood v. Detroit Board of Education, the Court upheld these arrangements, allowing the government to require employees who didn’t join the union to pay a “fair share” for collective bargaining.

Following Justice Antonin Scalia’s passing in February, Supreme Court watchers knew that the possibility of tie votes was likely for some high-profile cases on the docket, including this one. Scalia was considered a likely fifth vote for the challengers in Friedrichs.

At the oral argument in January, he expressed skepticism about the legal positions advanced by the state of California and the union and noted that everything that is collectively bargained for when it comes to government employees is necessarily within the political sphere.

This isn’t the first 4-4 tie, and it likely won’t be the last before the current term ends. Last week, the Court issued its first tie vote since Scalia’s passing in a case involving the Equal Credit Opportunity Act. When there is a tie at the Supreme Court, this simply leaves the judgment of the lower court in place. It also does not create precedent that is binding on any other appeals court.

Thus, other government employees who opt out of union membership could bring similar challenges in the future.

There are several other high-profile cases that could result in tie votes this term, such as Zubik v. Burwell, the challenge brought by the Little Sisters of the Poor and others to the Obama administration’s mandate that they offer health insurance covering potentially life-ending drugs and devices. A tie vote in that case would mean that the circuit courts remain divided, because the Eighth Circuit broke ranks with the other circuit courts, which all issued erroneous pro-administration decisions.

Whole Woman’s Health v. Hellerstedt, the case involving Texas’s abortion regulations, is another potential tie vote. At the oral argument, the liberal justices gave the state’s lawyer a hard time and seemed poised to vote for the abortion clinics and doctors challenging the regulations.

Finally, the multi-state challenge to the Obama administration’s deferred action immigration program also may result in a tie.

In addition to statutory claims, the 26 states argue that the administration violated the Take Care Clause of the Constitution by granting lawful presence and work permits that are “incompatible with the expressed or implied will of Congress.” In April, the Court will hear oral arguments, which may provide some insight into how the justices will rule.

The Friedrichs decision, while disappointing, demonstrates that even with only eight justices, the Supreme Court will soldier on without Scalia.

On average, only around 20-25 percent of cases are decided by one vote, so having one fewer justice won’t make much of a difference in the vast majority of cases. Indeed, at an event shortly after Scalia’s passing, Justice Stephen Breyer noted that “the cases come along[.] … We’ll miss him, but we’ll do our work.”