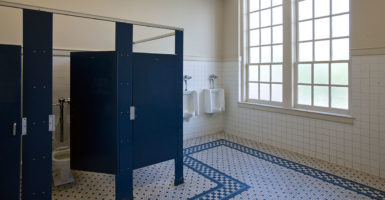 MADISON, Wis.—As the Madison Metropolitan School District faces a lawsuit over its policy on student gender identity, it is being accused of discriminating against transgender teachers in the bathroom.

On Madison Teachers Inc. fired out a press release last Tuesday asserting it supports equal restroom access for the school district’s students and staff. The union doesn’t like the district’s directive to Frank Allis Elementary School staff to “limit their use of restroom facilities to the single-person restroom.”

The union’s Equity and Diversity Committee, as well as Madison Teachers Inc.’s board of directors, released a statement saying that they “stand with Vica Steel and all our transgender, gender non-binary, lesbian, gay, bisexual, queer or questioning, intersex, and asexual or allied (LGBTQIA) staff.”

Steel is a transgender science teacher at Allis Elementary. In a letter published in Our Lives Magazine last month, Steel claims that she used the women’s/girls’ bathroom across from her classroom beginning in January after coming out last March.

The school district received a complaint and asked the elementary school’s principal to come up with a policy barring staff from using the same bathrooms as students.

“MTI supports staff’s and students’ right to fully exercise their individually identified expression in an environment free from discrimination of any kind,” the union said.

In short, the union supports transgender women (who used to be men) or men transitioning into women (and vice versa) using student bathrooms.

If all access is granted to transgender and transitioning students, then it must be applied to teachers, the union insists.

Will that include the voices of staff who disagree with the union and the district about their ideas of “equal restroom” access?

Union President Andy Waity did not return a call and an email from Empower Wisconsin seeking comment.

As the union notes in its press release, the school district does not have a districtwide policy that restricts staff restroom use. It is common practice for adults to use multistall restrooms, the union asserts.

But the transgender bathroom issue is more than just a distraction, some parents and students say: It’s a legitimate concern in the school district.

Steel wrote on Facebook that she wasn’t following the district’s order. She still uses the women’s/girls’ bathroom across from her classroom.

“I can’t say what will happen next, but I am hopeful that they [the district] will proceed with more care and that they will bring more voices, especially transgender voices and the voices of other marginalized people, to the table so any change of policy or practice is non-discriminatory,” Steel wrote.

It’s been a rough week for the Madison Metropolitan School District.

The Wisconsin Institute for Law & Liberty and Alliance Defending Freedom filed a lawsuit last Tuesday alleging district policies that enable children, at any age, to change their gender identity at school without parental notice or consent violate the Constitution.

More so, the legal groups allege, the policy instructs school district employees to “conceal and even deceive parents about the gender identity their son or daughter has adopted.”