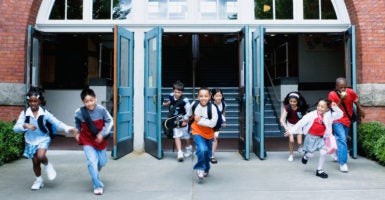 “This is a life-altering decision that educators have no business making,” says a lawyer for 14 parents who took their school district to court over its transgender policy for students. (Photo: Andersen Ross Photography Inc/Getty Images)

A group of Wisconsin parents is asking a state court to halt a public school district’s policy that they say instructs teachers to assist and encourage children in adopting transgender identities without notifying—and possibly while deceiving—parents.

The lawsuit, filed in Dane County Circuit Court, includes an affidavit from Dr. Stephen B. Levine, a distinguished life fellow of the American Psychiatric Association, in which he asserts that gender transitions for minors expose vulnerable children to dangerous, lifelong physical, social, and mental health risks.

“For a child to live radically different identities at home and at school, and to conceal what he or she perceives to be his or her true identity from parents, is psychologically unhealthy in itself, and could readily lead to additional psychological problems,” Levine writes in the affidavit. “Extended secrecy and a ‘double life’ concealed from the parents is rarely the path to psychological health. For this reason at least, schools should not support deceit of parents.”

Most children are both legally and developmentally incapable of giving informed consent to such a life-altering intervention. And parents, of course, cannot give informed consent if the fact of their child’s wish to assume a transgender identity is concealed from them.

The 14 parents are represented by lawyers with Alliance Defending Freedom and the Wisconsin Institute for Law & Liberty, both nonprofit, public interest legal organizations.

“This is a life-altering decision that educators have no business making,” Roger Brooks, ADF senior counsel, said. “As Dr. Levine explains based on decades of experience and extensive scientific literature, putting children on a pathway to puberty-blockers and cross-sex hormones can have devastating effects across a lifetime. That should serve as a wake-up call to parents and all Americans: When schools cast aside biological reality in favor of gender-identity ideology, it’s children who are hurt the most.”

The legal motion formally requests the court to impose a temporary injunction against the school district’s policy.

The school district “prioritizes working in collaboration with families to support our students and it is always our preferred method of support,” LeMonds said in a formal statement, adding:

MMSD must also prioritize the safety and well-being of every individual student who walks through its doors each day. It is with this focus [that] the district stands by its guidance document on transgender and non-binary students, and recognizes its tremendous responsibility to uphold the right of every child to be educated in a safe, all-inclusive, and nondiscriminatory learning environment.

The lawsuit calls for school officials to be transparent and honest when dealing with parents, and to meet standards of informed consent.

The 50-page affidavit from Levine says that multiple studies show that among children who experience gender dysphoria or transgender identification but do not socially transition, 80% to 98% “desisted,” or became comfortable with their biological sex, by young adulthood, according to Alliance Defending Freedom.

The affidavit also says that among boys “who engaged in a partial or complete social transition before puberty,” according to other data, fewer than 20% had desisted when surveyed at age 15 or older.

“It is profoundly unethical to reinforce a male child in his belief that he is not a boy (or a female child in her belief that she is not a girl), and it is particularly unethical to intervene in the normal physical development of a child to ‘affirm’ a ‘gender identity’ that is at odds with bodily sex,” Ryan T. Anderson, a senior research fellow at The Heritage Foundation, told The Daily Signal in an email, adding:

To do any of this without parental involvement not only harms children but violates parental authority. Childhood and adolescence are difficult enough as it is. Adults should not corrupt the social ecology in which children develop a mature understanding of themselves as boys or girls on the pathway to becoming men or women.