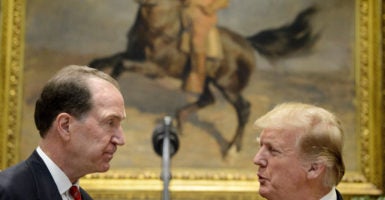 President Donald Trump speaks with David Malpass, his nominee to head the World Bank, during a Feb. 6 event in the Roosevelt Room of the White House. (Photo: Brendan Smialowski/AFP/Getty Images)

David Malpass, President Donald Trump’s nominee to be the next president of the World Bank, made a reassuring case for himself in a recent commentary in Financial Times.

“The World Bank has the opportunity to play a key role in fostering broadly shared economic growth and meeting the challenges presented by the 21st-century economy,” Malpass writes, adding:

This begins with a commitment to prioritize activities that will lead to broad-based growth in each borrower and to a stronger, more stable global economy. … [T]he bank should also facilitate the adoption of best practices for encouraging broadly shared growth and prosperity.

Not surprisingly, Malpass, 62, has proven credentials to carry on that critical task as the next chief of the World Bank, of which the United States is a founding member and the largest donor. He is a well-qualified advocate for what he calls “pro-growth policies including low taxes, spending control, stable money for the poor as much as for the rich, and the rule of law.”

In transforming the World Bank into a more effective and performance-based institution, Malpass will be well positioned to encourage policies and projects that advance economic freedom.

That undertaking is essential because it is not only at the core of the World Bank’s mission, but also at the heart of America’s engagement with the bank. It is clearly in America’s interest to take a leading role to enhance the bank’s effectiveness in promoting economic freedom around the world.

Indeed, at the core of encouraging economic development and reducing poverty is the mission of advancing economic freedom so that dynamic and inclusive growth can occur meaningfully for a greater number of ordinary people.

Economic freedom, cultivated by the rule of law, limited government, regulatory efficiency, and market openness, is critical to generating the widespread economic dynamism that brings more opportunities for people to work, produce, and save.

As the index has shown unambiguously over the past 25 years, adopting polices that advance economic freedom is the key to unlocking broad-based growth reinforced by a virtuous circle of opportunity, empowerment, and development.

Ensuring and spreading economic freedom has proven to be the best way to alleviate poverty, lift the standard of living, and empower women as well as men to participate fully in their countries’ economies.

Fortunately, Malpass knows the power of economic freedom and seems determined to focus the World Bank on what works in delivering measurable, tangible outcomes.

As a free-market economist, David Malpass is a welcome candidate for the World Bank presidency, which under his leadership could strengthen its role as a force for encouraging growth and long-term economic development based on advancing economic freedom for all.