US Economic Freedom Has Hit a Historic Low. What Happened? 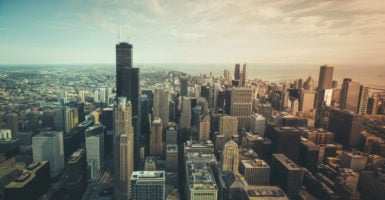 It’s already been eight years since the Great Recession, yet the U.S. economy has been just inching along, with its productivity flagging and millions being locked out of the labor market.

One critical underlying factor for this lack of economic dynamism has been the startling decline of America’s economic freedom, an unfortunate legacy of Barack Obama’s eight-year presidency.

The Heritage Foundation’s 2017 Index of Economic Freedom—an annual global study that compares countries’ entrepreneurial environments—highlights the urgent need for the U.S. to change course. For the ninth time since 2008, America has lost ground.

According to the 2017 index, the U.S. ranks 17th out of 180 rated economies, lagging behind other comparable advanced economies such as Switzerland (fourth), Australia (fifth), Canada (seventh), and the United Kingdom (12th).

The U.S. remains mired in the ranks of the “mostly free,” the second-tier economic freedom status into which it dropped in 2010.

Since 1995, the index has measured a nation’s commitment to limited government and free enterprise on a scale of 0 to 100 by evaluating four critical policy pillars, including rule of law and regulatory efficiency.

In fact, America’s standing in the index had dwindled steadily during the Obama years. This largely owed to increased government spending, regulations, and a failed stimulus program that enriched the well-connected while leaving average Americans behind.

A substantial expansion in the size and scope of government under the Obama administration—including through new and costly regulations in areas like finance, health care, and the environment—has hit wide swaths of the economy, affecting almost every American in some way and reducing opportunities for nongovernmental production and investment.

The growth of government has been accompanied by increasing cronyism that has undermined the rule of law and perceptions of fairness.

Our nation’s fiscal health has been grossly dented as well. The national debt has nearly doubled since 2009, growing from $10.6 trillion to around $20 trillion. In dollar terms, this is the largest increase in the national debt in U.S. history.

In practice, all of these negative developments that undercut America’s economic freedom have amounted to a gradual slide toward a more heavily bureaucratic state and an increasingly politicized economy over the past eight years.

Today, the imperative to restore America’s economic freedom and thereby revitalize vibrant entrepreneurial growth is stronger than ever. Americans deserve better, and they can do better.

It should be noted that free-market capitalism built on the principles of economic freedom does not just conserve the status quo. In many cases, it overturns and transforms. It pushes out the old to make way for the new so that real and true progress can take place. It leads to innovation in all realms: better jobs, better goods and services, and better societies.

The 2016 election was a game-changer. America has been given an incredible and unique opportunity to move away from Obama’s failed liberal policy agenda and toward an agenda that strives to restore America’s economic freedom and spur dynamic growth.

The Heritage Foundation has introduced such a plan, called “Blueprint for Reform: A Comprehensive Policy Agenda for a New Administration in 2017.”

It is time to act on this plan and once again unleash economic freedom and flourishing in America.