It’s Time for an Economic Freedom Partnership With Africa 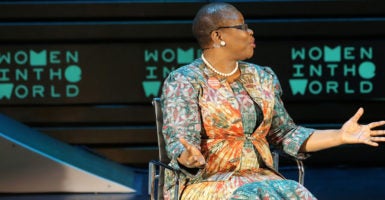 In the context of a strong plea for reparations and debt relief from China for its recent predatory behavior in Africa, Obiageli Ezekwesili, a former vice president of the World Bank and former Nigerian Cabinet minister, made a startling admission.

In a recent opinion piece for The Globe and Mail newspaper of Toronto, she wrote:

[W]hile there have been calls for voluntary international aid to support the continent during this difficult time, this is a fundamentally misguided proposal.

The solution is not giving aid to Africa … .

The current model of development assistance is broken; it can never deliver any real change of fortune.

Meanwhile, American aid continues to flow to Africa, including tens of millions of dollars for COVID-19 relief. Short-term relief is appropriate, but a central part of the U.S.’ long-term mission to assist African countries needs to be a renewed American effort to promote economic freedom throughout the continent.

An economically free and fully sovereign Africa is clearly in the broader foreign policy interest of the United States.

Analysts at The Heritage Foundation have long tracked—and warned about—the growing influence of China in the region and its potential diplomatic, economic, and strategic implications.

As a matter of fact, China has posed a growing challenge to American interests. Chinese officials have talked about the perils of foundational American principles, such as the protection of human rights and democracy, and increasingly offer their own authoritarian developmental experience as the one best-suited to African countries.

China also frequently has criticized what it says is the unfairness of the unipolar international system, a system that significantly contributes to American security and prosperity.

In its annual Index of Economic Freedom, The Heritage Foundation has long highlighted the economic benefits of free markets for developed and developing countries alike.

The U.S. cannot give countries in Africa the political will that they need to transform their economies according to free-market principles. However, it can, through consistent policy dialogues with its African partners and by providing technical help, ensure that it’s supporting the cause of economic freedom in Africa.

Ezekwesili seems to agree. Largely echoing the speech, “Fighting Poverty Through Economic Freedom,” that she delivered at The Heritage Foundation in 2011, Ezekwesili highlighted in her commentary:

Now, the economic shock has been caused by a crisis that emerged from China. It is one that has badly reduced the opportunity Africa would otherwise have had to lift hundreds of millions out of poverty and reduce inequalities. …

We need a new governance model that strengthens citizens so they can engage in the design of their pathway out of poverty and build health and economic resilience.

Indeed, it is time for Africa and the U.S. to work together to outline the road map for lasting freedom, opportunity, and prosperity, based on the principles of economic freedom.