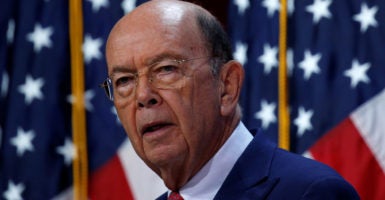 With the president’s cuts to the corporate tax rate and regulations, the United States will continue to be a prime destination for foreign investment that will add jobs and economic growth. However, the continuing threat of White House-imposed tariffs has domestic and foreign businesses worried. While investment and trade are connected, the White House has been taking the two issues in opposite directions.

Although the focus is often on jobs when talking about investment and trade, the dividing characteristic can still be boiled down to costs.

Commerce Secretary Wilbur Ross’ and State Secretary Mike Pompeo’s prepared remarks at SelectUSA both highlighted for investors that this administration is dedicated to American leadership. Again, they highlighted the benefits of America’s free market system through deregulation efforts, its booming energy sector, and cuts to the corporate tax rate. But both steered clear of talking about the one tax the administration is increasing: tariffs.

SelectUSA is an exciting event because it gives companies a chance to publicly announce their new investment plans. (Think of it like the NFL draft, a car show, or the World’s fair.) This year, however, the real costs that tariffs could have on companies has cast a shadow over the event.

One piece of news that came at the end of the SelectUSA summit might suggest otherwise. Last week, JSW Steel—an Indian-owned steel company that has been supportive of the White House’s steel tariffs—announced a $500 million investment. JSW Steel’s massive new investment, and several other substantial investments in U.S. industry, have been spun into “tariffs equal jobs” headlines. The story, however, is not so clear cut. In the case of JSW Steel, the company’s relationship with tariffs is complicated.

First, JSW has filed for an exclusion from the current steel tariffs, so it’s not clear that the company would be affected by the tariffs in the first place and, therefore, whether its decision to invest in the United States was motivated by the tariffs. In fact, John Hritz, president and CEO of JSW Steel’s U.S. subsidiary, wouldn’t confirm whether these new investments were because of the tariffs.

Finally, as a matter of current policy, given that JSW Steel is a foreign owned company and that the White House has determined that domestic steel production is a matter of national security, Ross should have no problem confirming whether JSW’s acquisition of U.S.-based Acero Junction has been reviewed by the Committee on Foreign Investment in the U.S. that reviews foreign investment for national security concerns.

The 300 additional jobs JSW’s investment is estimated to produce, like the benefits from all other foreign investment, is surely welcome. However, policymakers should hesitate before jumping to the conclusion that it’s due to increased American taxes on steel.

And while JSW may agree with the administration’s protectionism, the Indian government does not. India has now brought a case against the United States to the World Trade Organization, and it has also levied retaliatory tariffs on U.S. exports, including agricultural products, chemicals, and metals—potentially harming American jobs tied to exports in these sectors.

The United States’ economic strength comes from its economic freedom. While the administration is pursuing freedom by reducing corporate taxes and deregulating, the same can’t be said regarding its trade policy, which places greater emphasis on balancing trade accounts through any means necessary.

U.S. demand for steel is projected to increase over the next few years as investment grows in infrastructure and manufacturing, and foreign investors continue to jump at the chance to invest in America.

At the end of the day, though these companies are still impacted by the cost of their inputs—whether it’s labor costs, taxes, transportation costs, or raw materials—a continued increase in the price of steel by the U.S. government makes it harder for these companies to invest.