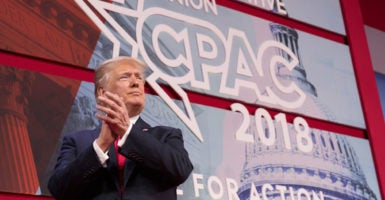 President Donald Trump found high poll numbers Saturday in an unsurprising venue. But the contrast with his past performances in the presidential straw poll at the Conservative Political Action Conference was striking.

Although Trump has a strong approval rating, a plurality of CPAC attendees surveyed said they wish he would tweet less and a majority said they oppose his position on ending the Senate filibuster rule.

The straw poll also showed a high tolerance for amnesty for illegal immigrants if it means a border wall will be built at the southern border.

The president scored a 93 percent approval rating from attendees, up from 86 percent last year. Just two years ago, Trump came in third place in the presidential preference question; he was in eighth place three years ago.

The straw poll, a partnership of the American Conservative Union, The Washington Times, and McLaughlin & Associates, sought to tap the views of the 1,155 conservative activists who reportedly attended CPAC this year.

The results revealed strong support from attendees for Trump’s first year in office.

For instance, 75 percent of respondents said they believe the country is on the right track, compared to 44 percent last year.

And 79 percent of respondents agreed that the Republican-controlled Congress should be doing more to support Trump’s agenda.

Regarding the investigation of Russian meddling in the 2016 election, 60 percent said special counsel Robert Mueller is being unfair, while 21 percent said he is fair and 19 percent said they aren’t sure.

In one area, a majority of respondents opposed Trump. The president has called on the Senate to end the filibuster rule, which requires 60 of the chamber’s 100 votes to advance legislation to a floor vote. Currently, Republicans have 51 seats.

Many conservatives note that doing away with the filibuster now only will make it easier for a future Democrat president and Senate to push through legislation.

That’s not a risk a majority of respondents at CPAC appear willing to take, as 54 percent said they oppose ending the filibuster, compared with 38 percent in support of doing so. Another 8 percent are not sure.

On a question facing both Trump and Congress, 75 percent said they favor granting amnesty to a small portion of illegal immigrants in exchange for securing funds to build a wall along the U.S.-Mexico border.

Respondents were offered nine options to answer this question: “President Trump’s tweeting is a hot topic. Do you wish he would … ?”

Fully 40 percent answered that Trump should “tweet less,” while 35 percent said “tweet more.” (And 37 percent agreed that “It’s not helping him and sometimes distracts from his message.”)

Trump asserted in his remarks Friday at CPAC that he has proved he is a conservative. In past years, attendees weren’t so sure.

In the 2016 straw poll, Trump came in third with 15 percent, trailing Sen. Ted Cruz of Texas with 40 percent and Sen. Marco Rubio of Florida with 30 percent. Trump, of course, went on to defeat both for the Republican nomination.

In 2015, months before he formally announced, Trump placed eighth in the CPAC straw poll, with only 3.5 percent. Sen. Rand Paul, R-Ky., won the straw poll that year with 25.7 percent.

CPAC, the largest annual national gathering of conservative activists, ran from Thursday to Saturday at the Gaylord National Resort and Convention Center in National Harbor, Maryland, just outside Washington.