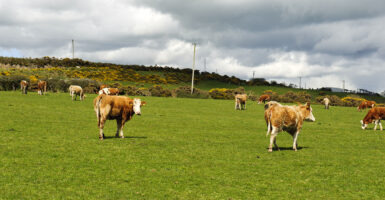 The Irish economy seems to be doing well, but the cost of living for many is outpacing growing prosperity. Pictured: Organic cow farm at Munster Province, County Waterford, Ireland. (Photo: Feifei Cui-Paoluzzo/Getty Images)

Americans are not the only ones suffering from high fuel and food prices, along with rapidly increasing costs for housing and rising mortgage rates.

The Irish, too, are experiencing a similar economic squeeze, but unlike Americans who can reduce financial pressures and move to states with no state taxes and cheaper housing, fuel, and food, the only option for Irish people is to leave the country.

A survey by the National Youth Council of Ireland has found “seven-in-10 young people, ages 18-24 are considering moving abroad for a better life. … Inflation is at its highest since 1984 … and mortgage rates are set to rise for the first time in 11 years.” The Irish Times reports 10,568 people, including 3,137 children, “are now categorised as homeless in the Republic.”

Some are calling on the government to impose price controls and slap a windfall profits tax on corporations and a wealth tax on individuals. Sound familiar?

The frustration is that the Irish economy seems to be doing well, but the cost of living for many is outpacing growing prosperity. Just one example. Taxis are increasingly difficult to hire. Many drivers left their jobs during the pandemic and it can take up to half an hour after one is called for a driver to arrive, unless you are fortunate enough to flag down an empty one. Many small shops, which on my last visit four years ago were open and apparently thriving, are now closed with graffiti marring their doors.

The National Youth Council of Ireland survey found another disturbing trend. Of the 1,253 respondents, “half reported worse mental health amid rising bills.”

If young people do leave, they will be following a sad tradition. As noted by the University of College Cork, “No country in Europe has been as affected by emigration over the last two centuries as Ireland. Approximately ten million people have emigrated from Ireland since 1800.”

On a visit to his ancestral home in June 1963, President John F. Kennedy referenced the historic outflow of Irish people: “Most countries send out oil or iron, steel or gold, or some other crop, but Ireland has had only one export and that is its people.”

At least Americans have better choices. CNN Business notes “millions of Americans ended 2020 living at a different address than where they started the year.” Part of it had to do with the pandemic, but interviews indicate that high state and local taxes and rising prices were also major factors.

The theme of emigration is at the heart of much Irish music. One of the saddest and yet most beautiful of them is “Song for Ireland.” Part of the lyric is as follows:

Talking all the day with true friends

Who try to make you stay

Singing songs to pass the night away

Living on your western shore

I stood by your Atlantic sea

And sang a song for Ireland.