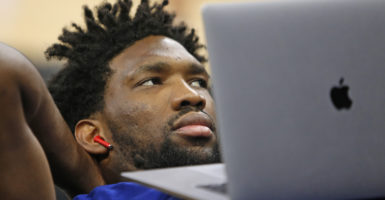 The FCC's net neutrality regulation could make a comeback if House Democrats have their way. Pictured: Philadelphia 76ers star Joel Embiid watches a basketball game on his laptop Dec. 17, 2018, as trainers work on him before a game against the San Antonio Spurs at AT&T Center in San Antonio, Texas. (Photo: Ronald Cortes/Getty Images)

Just over one year ago, the Federal Communications Commission voted 3-2 to repeal the network neutrality rules it adopted in 2015. However, the FCC regulation could make a comeback if House Democrats have their way.

Lawmakers in the House and Senate introduced legislation Thursday to restore the rule.

Sponsored by Sen. Ed Markey, D-Mass., and Rep. Mike Doyle, D-Pa., the three-page bill makes no attempt to modify or improve the 2015 rule. It simply declares that the 2017 order repealing net neutrality “shall have no force or effect.”

Formally titled the “Open Internet Order,” the FCC imposed the rule four years ago under its Democratic chairman, Tom Wheeler. But the political battle over net neutrality has gone on close to 17 years.

A Columbia University law professor, Tim Wu, coined the term “net neutrality” in 2002. Wu argued that because internet service providers such as Comcast and AT&T enjoy near-bottleneck control over the traffic going to web users, they should be prohibited from favoring any web content over another.

In other words, according to Wu, internet service providers should be required to treat content providers neutrally.

But regulation can make problems of its own. Today’s market for internet access is not perfectly competitive, but it is also clearly not a monopoly. Most Americans have the ability to choose from at least two service providers.

In addition, net neutrality would do nothing to increase the number of companies that compete in the market for access. In fact, it could make it harder for new entrants to compete effectively with existing market leaders.

That’s because one of the best ways to get a foothold in a market is to differentiate your service. For instance: T-Mobile, to differentiate itself in its struggle to compete with industry leaders AT&T and Verizon, pioneered “zero rating” pricing plans that allow free access to content from participating content providers without incurring a charge against your data cap.

T-Mobile’s free-data option has made wireless broadband available to millions at affordable rates. Zero-rating nevertheless has been condemned by many as a violation of net neutrality, and could be banned should Congress restore the rule.

Net neutrality is not needed to save the internet, but in fact could jeopardize it.

The FCC was right to reject net neutrality rules completely. Congress should do the same.

>>> Related: Time to End Net Neutrality Regulation Once and for All