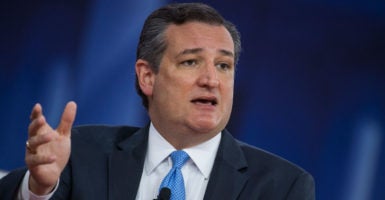 Sen. Ted Cruz, R-Texas, spoke strongly Thursday against gun control efforts renewed by liberals after a man with a rifle killed 17 at a high school in Parkland, Florida.

“If you are a parent, there is nothing more horrific than imagining some madman hurting kids,” Cruz told conservative activists gathered at the Conservative Political Action Conference.

“It’s perfectly reasonable to have this conversation, what can we do to stop this kind of mass crime. That’s a good conversation for us to have,” Cruz said. “The left’s answer is always, always, always restrict Second Amendment rights from law-abiding citizens.”

Cruz, speaking on the same day President Donald Trump held his second “listening session” on solutions to massacres committed with guns, argued that measures in support of law enforcement are more effective than gun control:

Here’s one of the many problems: It doesn’t work. If you look at the jurisdictions with the toughest gun control laws, cities like Chicago, cities like Washington, D.C., they all have among the highest murder rates and crime rates. You want to see crime take off, disarm the law-abiding citizens.

If you actually want to stop crime, what does work is targeting violent criminals, going after them like a ton of bricks, putting felons and criminals in jail. That’s what we need to be doing, and that’s what I’m leading the fight to do.

Cruz said he supports a proposal, backed by Trump, that would allow teachers to be armed.

“It makes perfect sense that if teachers want to exercise their right to keep and bear arms, that will only make schools safer,” Cruz said. “I don’t think you should make teachers do that. But if a teacher is comfortable and wants to defend himself or herself, that’s a good thing.”

Cruz talked about a bill he co-sponsored in 2013 with Sen. Charles Grassley, R-Iowa, that would have provided $300 million for school safety measures. It had bipartisan support from 52 senators, but Democrats filibustered the bill.

“If that $300 million of school safety funding had been there, that might well have resulted in an armed police officer at the Parkland high school, which might have made a difference in terms of intercepting that crazed madman and stopping him,” Cruz said.

That bill also would have cracked down on felons trying to buy guns, he said.

Cruz also cited the Sutherland Springs church shooting in his home state of Texas, where the gunman killed 26. He called it the “most horrific thing I have ever seen in my entire life.”

The interview with Cruz, conducted by Ben Domenech, publisher of The Federalist, was more lighthearted at times.

Domenech asked Cruz about CNN co-anchor and correspondent Chris Cuomo, saying the Texas Republican was afraid to be interviewed by the network.

In response, Cruz said no one in the “history of the universe” is afraid of Chris Cuomo.

Later, when talking about problems with Obamacare, Cruz noted that former President Bill Clinton, a Democrat, himself cited problems with the system.

“You can’t afford insurance because premiums have skyrocketed and to add insult to injury, the IRS comes along and fines you. It’s what led Bill Clinton to call Obamacare ‘one of the craziest things in the world.’ About the only time I ever agreed with Bill Clinton, well, other than about Hillary,” Cruz joked, getting an enthusiastic reaction from the ballroom.

Cruz also got a major ovation speaking to the largely youthful crowd.

“What I love most about it [CPAC] is all the young people,” Cruz said. “I call young people ‘Generation Freedom’ because you want to know what resonates to everyone who’s at some college that is run by a bunch of ’60s hippies who are imposing some draconian speech code.”

Kyle Perisic contributed to this report.