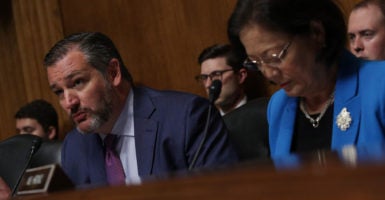 Sen. Ted Cruz, R-Texas, wants Google to explain why it disbanded an advisory council after Google employees objected to including the president of The Heritage Foundation. Pictured: Cruz speaks Tuesday during his subcommittee hearing on Google and censorship. (Photo: Alex Wong/Getty Images)

Cruz asked Karan Bhatia, Google’s vice president of government affairs and public policy, about the worldwide internet company’s disbanding of the advisory council after Google employees objected to including the head of the leading conservative think tank.

Bhatia replied that he considered Heritage to be a conservative organization.

“So 2,500 Google employees signed a petition to have Ms. James removed from the council and they said, quote, ‘By appointing James to the ATEAC, Google elevates and endorses her views implying that hers is a valid perspective worthy of its inclusion in this decision making, this is unacceptable,’” Cruz said.

The petition accused James of being “vocally anti-trans, anti-LGBTQ, and anti-immigrant,” and said, “In selecting James, Google is making clear that its version of ‘ethics’ values proximity to power over the wellbeing of trans people, other LGBTQ people, and immigrants.”

“Google, in response to this, dissolved the entire committee,” Cruz said to Bhatia. “Do you understand when you see that kind of bias, saying, ‘A conservative African-American woman’s views are not valid and not worthy of inclusion,’ that the American people would say, ‘These guys are silencing voices they disagree with’?”

James, who is black, overcame racial discrimination in Virginia as a girl and eventually became an educator and top state and federal government official before being named president of The Heritage Foundation, where she had been a trustee for more than a decade.

Bhatia told Cruz, chairman of the subcommittee, that the 2,500 employees who objected to James did not make up a large percentage of the Google workforce.

“Senator, the 2,500 amounts to something around 2% of the Google employees,” Bhatia said.

“But Google acted on their recommendation. You dissolved the committee,” Cruz replied.

>>> Commentary: Google Caves to the Intolerant Left, Betraying Its Own Ideals

Cruz continued to press the issue.

“Is this your testimony, Mr. Bhatia? Because I’m finding this difficult to credit. Is it your testimony that Google did not dissolve the committee because your employees were mad that anyone right of center was included?”

The Google vice president answered Cruz by saying the company pulled the plug on the advisory council because executives didn’t see it going anywhere.

“We dissolved the committee, Senator. I think we were clear at the end of the day that it was not going to be viable to continue the council given what we were seeing happen with other members of the committee,” Bhatia said.

Heritage’s James discussed the experience in an April op-ed for The Washington Post, writing that “the Google employees didn’t just attempt to remove me; they greeted the news of my appointment to the council with name-calling and character assassination.”

“They called me anti-immigrant and anti-LGBTQ and a bigot. That was an odd one, because I’m a 69-year-old black woman who grew up fighting segregation,” James added.

Referring to Google’s decision to end the panel, James wrote, “The company has given in to the mentality of a rage mob.”