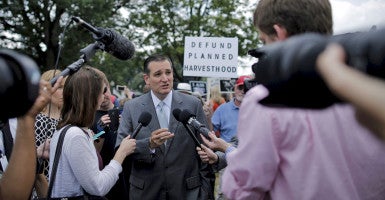 As the Senate voted Monday on a continuing resolution with taxpayer funding for Planned Parenthood, Cruz attempted to offer an amendment ending all federal funding for America’s largest abortion provider. The amendment also cut off money to implement the Iran nuclear deal.

But in a departure from Senate custom, a quartet of Republican leaders blocked the Texas senator from even getting a vote on his amendment. Only one senator, Mike Lee of Utah, stood with Cruz on the Senate floor.

After Cruz was stymied, the Senate proceeded to vote on a motion, 77-19, to advance the government spending bill, which funds federal operations through Dec. 11.

Planned Parenthood, which performs an abortion every 90 seconds on average, is embroiled in a scandal stemming from a series of undercover videos. Those videos have prompted federal and state investigations into Planned Parenthood’s involvement in the alleged sale of aborted baby body parts.

Last week, Cruz told The Daily Signal that congressional Republicans were failing in their quest to end taxpayer funding for Planned Parenthood because GOP leadership signaled its unwillingness to challenge Obama on the issue.

In a lengthy Senate speech Monday, Cruz accused his own party of adopting tactics employed by Democrat Harry Reid, the former majority leader, against a fellow Republican.

“Senators on this side of the aisle stood up over and over again and said it’s an abuse of process,” Cruz said. “In fact, we even campaigned our leadership, saying we’re going to have an open amendment process. Yet, what’s happened here is Majority Leader McConnell has taken a page out of Leader Reid’s playbook.”

That process—known as “filling the tree”—is what Cruz attempted to undo Monday with his Planned Parenthood and Iran amendment. His fellow GOP senators, however, refused to second Cruz’s motion.

Cruz called the move an “unprecedented procedural trick.” He vowed to offer the amendment again Tuesday when the Senate votes on final passage of the government spending bill.

“I encourage those watching to see, No. 1, when this motion is offered again, who shows up to offer a second and who either doesn’t raise his hand or just doesn’t come to the floor,” Cruz said. “One of the ways you avoid accountability is you somehow are somewhere else doing something really, really important instead of actually showing up to the battle that is waging right here and now.”

Update: According to Cruz’s office, he did not have time to speak Tuesday to offer the amendment again.