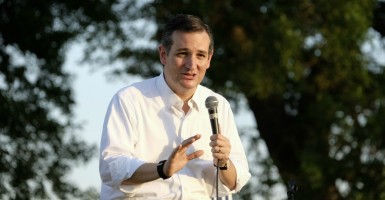 “Even in light of the two tragic Supreme Court decisions this week, I want to challenge each and every one of you to believe again,” Cruz, a Republican candidate for president in 2016, told the audience at Drake University.

Cruz then took a moment to pause and stated, “America was founded on the revolutionary ideas of freedom and equality.”

Cruz labeled Obamacare a “disaster” that should be repealed.

He referred to marriage as “an institution that was ordained by God” that “long predates the United States of America.”

Throughout the speech—as the crowd held up ‘Cruz’ signs and mini American flags—Cruz received much cheering, clapping, and chants of “Cruz, Cruz, Cruz.”

Cruz’s voice grew louder as he said that judges are not above the people. He proposed “an amendment to the United States Constitution that would subject each and every justice of the Supreme Court to periodic judicial retention.”

In April 2009, the Iowa Supreme Court made the state the first Midwestern state to allow same-sex marriage. Later, in 2010, three of the justices who participated in that ruling were removed from office by Iowa voters.

“Here in the state of Iowa,” Cruz said, “the men and women in this room and across this great state stood up to judicial tyranny.”

“In 2010, the people of Iowa stood up to a Supreme Court that issued the same law that the Supreme Court issued yesterday,” Cruz continued. “We’ve done it before and we can do it again.”

Cruz also outlined his positions on education and foreign policy. He called school choice the “civil rights issue of the 21st century” and criticized Common Core.

On national defense, Cruz stated, “We shouldn’t be making deals with our enemies.” Rather, “We should defeat them.”

Cruz also continued his call to abolish the Internal Revenue Service, which he considers to be part of the “Washington cartel.”

“An alliance of big money and politicians who want to stay in power has reverted our Constitutional Republic,” Cruz said. “No one in Washington represents the future. The game is rigged and they want to keep that game rigged in their favor. When they tell you it’s not about the money, it’s about the money.”

Cruz’s voice then escalated with intensity.

“I ain’t running to manage Washington,” he said. “I’m running to change it.”