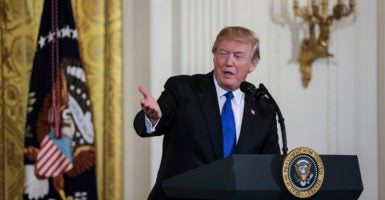 President Donald Trump hopes to strike a “bipartisan” and “forward-looking” tone when pushing a theme of “Building a Safe, Strong and Proud America,” for his first State of the Union address on Tuesday, a senior administration official said.

The speech will focus on five key issues: seeking to reach an immigration deal in Congress; the strong economy from his first year in office; pushing a $1 trillion infrastructure plan; “fair and reciprocal trade” with other nations; and rebuilding the military, the senior administration official told reporters Friday in a background briefing.

Trump will talk about the economic recovery of 2017, regarding records set in the stock market, increasing wages, millions of new jobs, deregulation, and the passage of the Tax Cuts and Jobs Act.

The White House released an immigration deal that would provide amnesty for 1.8 million young illegal immigrants brought to the country as minors. In exchange for amnesty, the administration would get $25 billion as a down payment for a physical wall and other security along the southern border, and phase out of chain migration and end to the visa lottery program.

The White House proposal would give legal status to more than twice as many illegal immigrants that President Barack Obama’s Deferred Action for Childhood Arrivals shielded from deportation.

However, the senior administration official wouldn’t respond directly as to a question about whether amnesty simply encourages more illegal immigration.

“I really won’t get into that. The framework was released [Thursday],” the official told The Daily Signal. “The president cares about American workers, American families, protecting their wages, protecting their opportunities to rise. That will be reflected in the speech.”

Trump has previously said the $1 trillion spending on infrastructure will come from a public-private partnership, in which federal funds would leverage greater private investment. The official on Friday didn’t touch on specifics.

The president will also showcase faces of the opioid crisis and heroes involved in fighting the crisis that has led to millions of deaths, a senior administration official said.

Trump delivered a speech to a joint session of Congress last year, but it was not an official State of the Union.

The preview offered to the media was only a glimpse with reluctance to go into detail. But when asked what headline will come out of the speech, and what the administration would like to see as the headline, the official had a response.

“One headline will be the economy is roaring. Another headline is that the president cares about all Americans,” the official said.