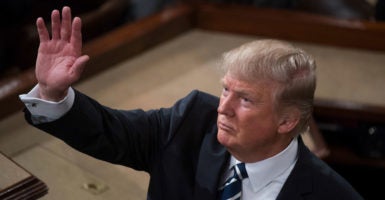 "We will look back on tonight as when this new chapter of American greatness began," said President Donald Trump, here waving Tuesday night after addressing a joint session of Congress. (Photo: Tom Williams/CQ/Roll Call /Newscom)

“The time for small thinking is over,” @POTUS says.

Trump spoke for about an hour, prompting cheers and standing ovations from his fellow Republicans, as when he touted his intention to propose one of the biggest increases in defense spending in American history, and vowed of the Islamic State, or ISIS, “to extinguish this vile enemy from our planet.”

Democrats joined in when the president spoke directly to Carryn Owens, the widow of the Navy SEAL William “Ryan” Owens, who was killed last month in an operation in Yemen.

“Ryan’s name is etched into eternity,” Trump said, prompting an extended ovation as Carryn Owens struggled to keep her composure, looking skyward while tears streamed down her face.

Trump was positive and optimistic throughout the speech, reaching out to Democrats several times.

“When we fulfill this vision, when we celebrate our 250 years of glorious freedom, we will look back on tonight as when this new chapter of American greatness began,” Trump said,  adding:

The time for small thinking is over. The time for trivial fights is behind us. We just need the courage to share the dreams that fill our hearts. The bravery to express the hopes that stir our souls. And the confidence to turn those hopes and dreams to action. From now on, America will be empowered by our aspirations—not burdened by our fears.

The five Supreme Court justices who attended the address all stood to applaud Maureen Scalia, widow of the late Justice Antonin Scalia, when Trump recognized her as she sat with first lady Melania Trump.

“Her late, great husband, Antonin Scalia, will forever be a symbol of American justice,” Trump said. “To fill his seat, we have chosen Judge Neil Gorsuch, a man of incredible skill, and deep devotion to the law. He was confirmed unanimously to the Court of Appeals, and I am asking the Senate to swiftly approve his nomination.”

Trump won thunderous applause from Republicans in the House chamber when he renewed his call for repealing and replacing Obamacare—formally known as the Affordable Care Act, which was supposed to be the signature legislative achievement of his predecessor.

“Mandating every American to buy government-approved health insurance was never the right solution for America,” Trump said. “The way to make health insurance available to everyone is to lower the cost of health insurance, and that is what we are going to do … Obamacare is collapsing—and we must act decisively to protect all Americans. Action is not a choice—it is a necessity.”

First, we should ensure that Americans with pre-existing conditions have access to coverage, and that we have a stable transition for Americans currently enrolled in the health care exchanges.

Secondly, we should help Americans purchase their own coverage, through the use of tax credits and expanded health savings accounts—but it must be the plan they want, not the plan forced on them by the government.

Thirdly, we should give our great state governors the resources and flexibility they need with Medicaid, to make sure no one is left out.

Fourth, we should implement legal reforms that protect patients and doctors from unnecessary costs that drive up the price of insurance—and work to bring down the artificially high price of drugs, and bring them down immediately.

Finally, the time has come to give Americans the freedom to purchase health insurance across state lines—creating a truly competitive national marketplace that will bring cost way down and provide far better care. So important.

Trump, who made immigration enforcement the cornerstone of his campaign, talked briefly but strongly about how his administration will enforce the law and build “a great, great wall.”

He also called on Congress to reform the legal immigration system in a merit-based way along the lines of other countries:

Nations around the world, like Canada, Australia, and many others, have a merit-based immigration system. It is a basic principle that those seeking to enter a country ought to be able to support themselves financially. Switching away from this current system of lower-skilled immigration, and instead adopting a merit-based system, will have many benefits: It will save countless dollars, raise workers’ wages, and help struggling families—including immigrant families—enter the middle class.

I believe that real and positive immigration reform is possible, as long as we focus on the following goals: to improve jobs and wages for Americans, to strengthen our nation’s security, and to restore respect for our laws. If we are guided by the well-being of American citizens, then I believe Republicans and Democrats can work together to achieve an outcome that has eluded our country for decades.

Trump also drew boos from Democrats when he noted creation of a new office to help victims and survivors of  serious crimes committed by illegal immigrants. They quieted, though, when he saluted four Americans in the audience who lost family members to such crimes.

At another point, Trump said he supports free trade, but that it also must be fair trade.

“The first Republican president, Abraham Lincoln, warned that the ‘abandonment of the protective policy by the American government will produce want and ruin among our people,’” Trump said. “Lincoln was right—and it is time we heeded his words. I am not going to let America, and its great companies and workers, be taken advantage of anymore.”

The president later touched on the legacy of a more recent Republican leader to promote his plans to rebuild roads, bridges, and other infrastructure—something that many Democrats say they can agree on.

Without specifying the wars in Afghanistan and Iraq, Trump said:

Another Republican president, Dwight D. Eisenhower, initiated the last truly great national infrastructure program—the building of the interstate highway system. The time has come for a new program of national rebuilding. America has spent approximately $6 trillion in the Middle East, all this while our infrastructure at home is crumbling. With this $6 trillion, we could have rebuilt our country—twice. And maybe even three times, if we had people who had the ability to negotiate.

To launch our national rebuilding, I will be asking the Congress to approve legislation that produces a $1 trillion investment in the infrastructure of the United States—financed through both public and private capital—creating millions of new jobs.