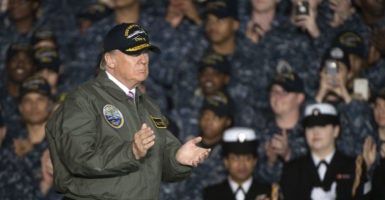 The government shutdown may be over for now, but that doesn’t mean our military and national defense are on track to achieve the rebuilding that President Donald Trump has promised.

After three days of a shutdown, lawmakers agreed on a short-term continuing resolution that will keep the government open until Feb. 8.

When your options are between a continuing resolution and shutting down the government, almost everyone in national security would pick the short-term measure.

These $4 billion were wasted over nine years of continuing resolutions in just one branch of the military. This waste comes from the fact that short-term contracts can only be issued for the duration of the continuing resolution and have to be reissued later, creating additional and repetitive contracting and budget work.

This sort of time crunch will lead to worse budgetary decisions, as the military will necessarily face a compressed timeline to allocate the resources that Congress has defined.

The chairman of the Joint Chiefs of Staff, Gen. Joseph Dunford, explained:

We want to be good stewards of the taxpayer dollar, and in order to do that, you’ve got to lay out a plan. Sometimes when you’re forced to spend all the money in a compressed period of time at the end of the fiscal year, it isn’t necessarily as efficient a use of the resources as you’d want it to be.

The fiscal year started on Oct. 1, 2017, and since then Congress has been unable to settle on a budget, with no agreement in sight. When this week’s new continuing resolution expires on Feb. 8, the Defense Department will have spent over four months under a temporary funding mechanism, or more than one-third of the fiscal year.

The one way to ameliorate the series of continuing resolutions is to include language, known as “anomalies,” in the bill that would allow the military, for instance, to increase the purchase of missile interceptors, or dedicate more funding to naval repairs.

These are changes that Congress usually makes through its budget process, but the current short-term resolution contains no such language. As such, Congress is not even trying to alleviate the damage caused by continuing resolutions—not that trying would have much of an effect.

As House Armed Services Committee Chairman Mac Thornberry, R-Texas, has said, “[T]here is no number of ‘anomalies’ that can fix the damage that a [continuing resolution] causes. You just can’t do it.”

A list of potential anomalies has circulated among members on Capitol Hill, but it appears they had little impact on the lawmakers who crafted the continuing resolution.

With or without anomalies, the negative effects that continuing resolutions have on training and maintenance schedules are real and have been accumulating over time. Secretary of Defense James Mattis has written to lawmakers detailing the impacts of operating under a continuing resolution, which range from delays in the availability of ships to loss of training time.

When Mattis described the funding that would be required to execute the Pentagon’s recently released national defense strategy, he used three adjectives: sustained, predictable, and increased. Another continuing resolution fails to deliver any of these.

The National Defense Authorization Act was approved on a bipartisan consensus. It’s time for our lawmakers to adhere to that consensus and let it determine the defense budget, rather than being held up by unrelated domestic policy issues.