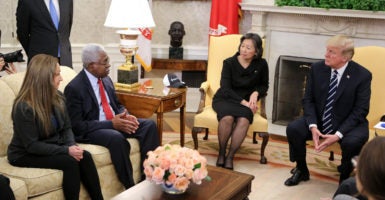 President Donald Trump meets in January with American workers regarding hoped-for effects of the Tax Cuts and Jobs Act. A new survey suggests voters from states with Democratic senators are warming up to the results. (Photo: Oliver Contreras/Sipa USA/Newscom)

More than half of registered voters in blue or battleground states that Donald Trump won in the 2016 presidential election, each of which has a Democrat senator up for re-election, say the economy is better than it was a year ago, according to a new survey.

A majority of surveyed voters in nine of those states also are happy with the Tax Cuts and Jobs Act, which Congress passed and Trump signed into law Dec. 22, the survey found.

In Pennsylvania, those surveyed were divided, with 49 percent approving of the tax cuts and 49 percent disapproving.

The survey is part of a trend showing increasing favorability toward the Trump tax cuts. The Axios/SurveyMonkey results echo those of a New York Times/SurveyMonkey poll previously reported by The Daily Signal.

A plurality in the new survey, 24 percent, said “jobs and the economy” is the most important issue, with health care close behind at 21 percent.

If upcoming Senate elections were held today, the survey found, the 10 states would split evenly between the two parties.

Republicans would gain five more seats, potentially increasing their majority from 52 to 57, with wins in Indiana, Missouri, Montana, North Dakota, and West Virginia.

Democrats would retain five seats, according to the survey, with victories in Michigan, Florida, Ohio, Pennsylvania, and Wisconsin.

Notably, the respondents self-identified equally at 31 percent for each major political party. Another 35 percent said “neither,” and 3 percent said they weren’t sure.

Axios/SurveyMonkey surveyed a total of 17,289 registered voters in the 10 states from Feb. 12 to March 5. The survey results did not specify a margin of error.