9 Ideas for Negotiating a Better NAFTA 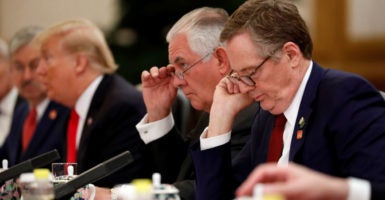 Since then, four rounds of negotiations have taken place among the United States, Canada, and Mexico. The fifth round starts this week.

Here are nine ideas for NAFTA that would promote the Trump administration’s economic growth agenda.

1. Encourage a year-round supply of affordable fruit and vegetables.

Some U.S. producers want to rig U.S. anti-dumping laws in order to make it easier to restrict imports of perishable and seasonal fruits and vegetables from Mexico.

That would be bad for the health of U.S. consumers, while potentially prompting reciprocal restrictions from Canada and Mexico on U.S. exports of corn, wheat, and other products.

2. Create a good agreement that is designed to last.

Some proposals call for NAFTA to self-destruct after five years unless all three countries agree to renew it.

That would make it nearly impossible for U.S. exporters and investors to make long-term business decisions. If negotiators successfully create a new and improved NAFTA, Americans should hope it lasts much longer than five years.

Instead of arbitrarily terminating NAFTA after five years, a better idea would be to periodically review the agreement, along with Canada and Mexico, and identify ways it can be improved.

3. Promote U.S. manufacturers’ access to the best inputs from across the globe.

One reported NAFTA proposal would require cars to have at least 50 percent U.S. content in order to qualify for tariff-free status.

It would be a mistake for U.S. trade negotiators to push for domestic content mandates like those imposed by Venezuela and Russia.

A related proposal to increase the North American content requirement for cars to receive tariff-free status from the current 62.5 percent level to 85 percent would have a similar impact.

4. Reduce the burden of labor and environmental regulations.

Many U.S. free trade agreements include unrelated provisions on labor and environmental regulation.

A better idea would be to use free trade agreements to eliminate trade barriers. As The Heritage Foundation’s Index of Economic Freedom shows, countries with low trade barriers have higher average incomes and cleaner environments.

5. Stick to the constitutional principle that governments should not take Americans’ property without providing just compensation.

NAFTA allows U.S. citizens who think that either Canada or Mexico has seized their investments to appeal to a neutral arbitration panel, instead of relying on the court system of the government that just stole their property.

It would be self-destructive to remove this provision. For example, last year, Indiana-based Windstream Energy received $28 million in compensation after Ontario, Canada, announced a wind farm moratorium.

In Mexico, legislation has been introduced that would allow the government to seize U.S. assets if any U.S. actions affect the property of Mexican citizens or companies. Without NAFTA, if that ever happened, U.S. investors would have to turn to Mexico’s court system to request compensation—and hope for the best.

6. Maintain incentives for all three countries to play by the rules.

If the Trump administration succeeds in negotiating a good NAFTA agreement, it will want to include measures to make sure Canada and Mexico do not pick and choose which rules to follow and which rules to ignore.

NAFTA should include enforceable dispute resolution provisions to make sure Canada and Mexico play by the rules.

7. Give U.S. taxpayers the best “bang for the buck” in government contracts.

Under NAFTA’s government procurement rules, the governments of Canada, Mexico, and the United States are not supposed to discriminate against other North American suppliers.

This provision helps U.S. taxpayers by encouraging competition for government contracts from businesses based in Canada and Mexico. It also benefits U.S. companies that provide goods and services to foreign governments.

If this provision of NAFTA is weakened, Canada and Mexico could implement “don’t buy U.S.” government procurement laws detrimental to U.S. interests.

Under NAFTA, trucks can freely deliver goods among all three countries as long as they comply with each country’s respective safety guidelines.

One wasteful proposal is to eliminate this provision and instead require trucks to stop at the U.S. border, unload their cargo, load it onto a short-haul truck to be ferried across the border, unload that truck, and then reload the cargo onto trucks based in the destination country.

This regulation would worsen congestion at the border and increase transportation costs.

9. When looking at trade balances, don’t cherry-pick the data.

Although the Trump administration’s emphasis on reducing bilateral trade deficits has generated intense criticism from economists, there is no harm in efforts to achieve balance between the United States and our trading partners—as long as everything is counted.

This results in incomplete and confusing “trade deficit” reports. U.S. Department of Commerce statistics show that when all international transactions are accounted for, including investment, U.S. transactions with Canada and Mexico balance.

The Guiding Principle for US Trade Agreements

U.S. trade negotiators should push for adoption of measures in NAFTA that advance the Trump administration’s efforts to boost U.S. economic growth.

That means advancing proposals that increase the freedom of Americans to engage in mutually beneficial transactions with people in Canada and Mexico, while resisting efforts to impose new barriers that would restrict Americans’ freedom.