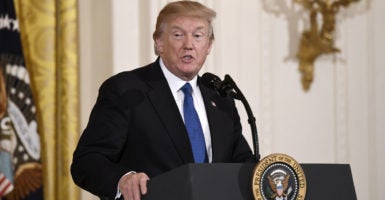 The White House would like to see $25 billion for beginning the construction of a border wall along the U.S. southern border, more funding for border security personnel, an end to chain migration, and an end to the Diversity Visa Lottery system. (Photo: Abaca Press/Douliery Olivier/Abaca/Sipa USA/Newscom)

The White House would like to see $25 billion for beginning the construction of a border wall along the U.S. southern border, more funding for border security personnel, an end to chain migration, and an end to the Diversity Visa Lottery system.

The group of 1.8 million illegal immigrants exceeds the 800,000 illegal immigrants brought to the country as minors who were shielded from deportation under President Barack Obama’s 2012 Deferred Action for Childhood Arrivals, or DACA.

Those 1.8 million illegal immigrants would be on a path to citizenship that the White House estimates would take 10 to 12 years, and would involve work, education, and character requirements.

“Amnesty comes in many forms, but it seems they all eventually grow in size and scope. Any proposal that expands the amnesty-eligible population risks opening pandora’s box, and could lead to a Gang of Eight style negotiation. That should be a non-starter,” said Mike Needham, CEO of Heritage Action for America, in a statement.

Sen. James Lankford, R-Okla., called the deal “a solid framework for immigration reform that provides a responsible solution for DACA, border security, and other immigration issues.”

“This framework provides certainty for families, enacts common-sense reforms to nuclear family sponsorship policy, and protects our nation,” Lankford said in a statement.

“Ignoring our many immigration problems is a form of amnesty that must end. In the days ahead, Congress must immediately engage in honest immigration debate focused on solutions, not partisanship.”

Lankford has introduced his own DACA legislation called the SUCCEED Act, a proposal that Heritage Foundation policy analyst David Inserra called “fundamentally flawed” because it provides amnesty with only future efforts to secure the border.

Another key lawmaker in the immigration debate, Sen. David Perdue, R-Ga., voiced his support for the White House proposal. Perdue and Sen. Tom Cotton, R-Ark., are sponsors of the RAISE Act, which proposes reforms to the legal immigration system.

“The White House framework is something that both Republicans and Democrats in the House and Senate should be eager to support,” Perdue said in a statement. “We all want a good deal, and here it is.”

The administration announced the winding down of the DACA program in September, but gave Congress a March deadline to find a legislative solution. The DACA rule, never enacted by Congress, was facing a potential multistate lawsuit.

Trump is attending the World Economic Forum in Switzerland.

The apparent deal comes shortly after Trump and Republicans seemed to score a victory in a legislative standoff over DACA. Although Senate Democrats initially blocked a funding bill to keep the government open unless it provided a solution to DACA, they did vote for such a bill days later, ending the short government shutdown.

“If any amnesty negotiations are to take place, they should remain extremely limited in scope so as not to encourage further illegal immigration,” Needham added in his statement. “It is imperative President Trump hold firm to his commitment to eliminate chain migration. Voters overwhelmingly agree with his position that immigration should be based on merit, not whether a distant relative holds a green card.”

This article has been corrected to reflect when the administration announced the winding down of the DACA program.