Trump Wants Private Investment in Infrastructure. The Tax Bill Doesn’t Do That. 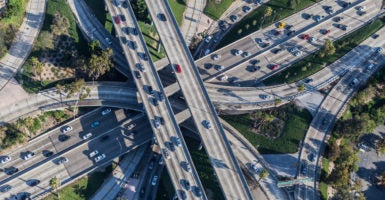 Local and state governments have an effective monopoly on transportation infrastructure, largely because of the tax exemption for municipal bonds. (Photo: iStock Photos)

Following on the president’s campaign promise to invest $1 trillion in the nation’s infrastructure, the Trump administration has made it clear that it intends to draw heavily on private capital to reach that goal.

However, a provision in the tax reform bill appears to run directly counter to the administration’s plan to pursue private financing and public-private partnerships.

The tax reform proposal is rightfully lauded for eliminating many special-interest carve-outs and exemptions, such as those that provide tax preferences for the construction of private sports stadiums.

One such exemption that the proposal also eliminates is for a class of tax-exempt bonds called private activity bonds, which the bill eliminates under Section 3601.

Unlike municipal bonds, however, private activity bonds only provide a tax exemption for bonds that finance certain “qualified” projects, as designated by Congress (bonds for projects that are not “qualified” do not receive tax-exempt status). These types of projects—as the bonds’ name suggests—are not exclusively public and accrue some benefits to private entities.

While the tax exemption for many of these qualified activities—such as those that skew decisions regarding educational facilities or green buildings—clearly deserve the chopping block, qualified private activity bonds currently play a critical in role in advancing private investment in infrastructure.

Local or state governments have an effective monopoly on nearly all transportation infrastructure in the United States. This is largely due to the tax exemption for municipal bonds, which provides an effective subsidy for state and local borrowing for infrastructure projects.

Because municipal bond interest is tax-exempt, a local government issuing municipal bonds for an infrastructure project can command lower interest rates than a private company financing the same exact project with corporate bonds (the interest on which is taxable).

This creates a hugely skewed playing field toward government-provided infrastructure in the United States. (The exemption also incentivizes localities to take on more debt than they otherwise would and diffuses the true cost of infrastructure projects, particularly megaprojects.)

Qualified private activity bonds for infrastructure projects help alleviate this inequity by bringing the cost of privately financed infrastructure, such as toll roads and airports, closer to that of government-financed projects.

Thus, in the current tax environment, private activity bonds are a crucial tool for breaking the artificially imposed government monopoly on infrastructure and fostering private infrastructure investments and public-private partnerships, as the Trump administration has been advocating.

The elimination of private activity bonds particularly targets airports, which even under government ownership must utilize these bonds instead of municipal bonds in many cases (because private airlines stand to benefit from certain projects).

Ideally, Congress should simplify infrastructure financing by eliminating the tax preference for municipal bonds wholesale, thus rendering the need for private activity bonds obsolete. This would end the picking of winners and losers in the tax code and put the United States infrastructure financing system on par with that of all other developed countries.

However, unless that happens in subsequent iterations of the tax reform debate, the elimination of qualified private activity bonds for infrastructure projects stands to complicate the administration’s push for greater private investment in infrastructure.