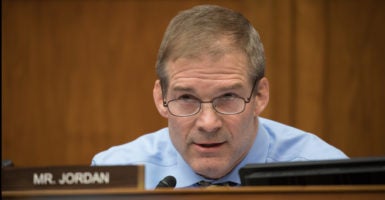 Some lawmakers are calling on the House intelligence committee to release a classified memo they say contains information on the FBI’s handling of a controversial anti-Trump dossier, as well as about related abuse of the government surveillance law known as FISA.

“This has to been seen,” Rep. Jim Jordan, R-Ohio, said Sunday of the four-page memo in an interview with Fox News Channel.

“It needs to be seen by journalists like all of you, but more importantly, it has to be seen by the American people, because never forget what we know already,” Jordan said of the secret memo, adding:

What we know already is the Democrats financed this dossier [targeting Donald Trump]. The Democrat National Committee, the Clinton campaign, paid Fusion GPS who paid Christopher Steele who paid Russians to do what? Influence the election.

Steele, a former British intelligence officer, authored a document containing allegations about Trump’s connections with Russia before he was the Republican nominee for president. Steele wrote the document for Fusion GPS, a research company that was paid for the work by the Democratic National Committee and Hillary Clinton’s presidential campaign.

James Comey, who was fired as FBI director by Trump, said June 8 that the so-called Trump dossier was unverified, and Jordan and other Republican lawmakers continue to press for answers from the FBI.

The Daily Signal requested comment on release of the memo from the House Permanent Select Committee on Intelligence, but did not receive a response by publication deadline.

It is not clear who drafted or sent the memo and to whom.

The three lawmakers met “to discuss the prospect of releasing some of the intelligence to support the findings of the classified memo, which was prepared by Nunes and Republican committee staff,” the cable network reported.

In a statement released Monday, the three House committee chairmen expressed concern with the revelation that at least five months’ worth of electronic text messages between FBI special agent Peter Strzok and FBI lawyer Lisa Page had gone missing.

Strzok and Page, who were having an affair and were once attached to Trump-related probes,  denigrated the Republican nominee in previously released text messages.

Nunes, Gowdy, and Goodlatte said in their written statement:

The contents of these text messages between top FBI officials are extremely troubling in terms of when certain key decisions were made by the Department of Justice and the FBI, by whom these decisions were made, and the evident bias exhibited by those in charge of the investigation. The omission of text messages between December 2016 and May 2017, a critical gap encompassing the FBI’s Russia investigation, is equally concerning. Rather than clearing up prior FBI and DOJ actions, these recently produced documents cause us to further question the credibility and objectivity of certain officials at the FBI.

“If we’re going to go through the process anyway of declassifying the memo, are there some of the supporting documents that might not reveal sources and methods but might answer key questions that the memo does raise?” Rep. Matt Gaetz, R-Fla., told CNN about releasing the memo.

“Chairman Goodlatte and Chairman Gowdy and Chairman Nunes each sort of have jurisdiction over elements, and they are meeting and discussing a process now that I think will lead to greater transparency,” Gaetz said.

This post was updated to include the statement by Nunes, Gowdy, and Goodlatte.