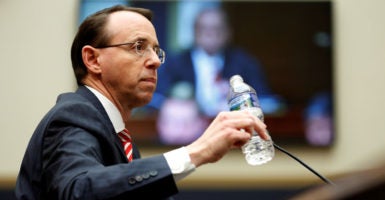 Revelations that FBI investigators who were part of special counsel Robert Mueller’s team sent each other derogatory text messages about Donald Trump during the 2016 campaign dominated a House hearing Wednesday featuring the No. 2 Justice Department official.

The electronic messages disparaging Trump fit into a larger pattern of partisanship undermining the integrity of Mueller’s ongoing probe into allegations the Trump campaign team colluded with Russia, according to legal analysts and government watchdogs.

The Justice Department submitted copies of about 375 of the two FBI agents’ text messages to Congress on Tuesday night, as Politico reported and Republican and Democrat lawmakers confirmed Wednesday during the House Judiciary Committee hearing.

The text messages are exchanges between Peter Strzok, who served as deputy director of  the FBI’s counterintelligence division, and Lisa Page, an FBI attorney. Strzok and Page reportedly were having an extramarital affair at the time they sent the text messages about Trump and other 2016 presidential candidates.

Rep. Darrell Issa, R-Calif., said Strzok’s “strident” texts created an appearance of impropriety and was one reason to appoint a second special counsel to look into wrongdoing within the FBI and the Justice Department designed to “hang” Trump.

“Were you aware of just how biased Mr. Strzok was?” Rep. Louie Gohmert, R-Texas, asked Deputy Attorney General Rod Rosenstein during the hearing.

“No, I was not,” Rosenstein replied.

“It’s not just the FBI agents and their obvious partisanship,” Hans von Spakovsky, a senior legal analyst at The Heritage Foundation, told The Daily Signal. “It is now a whole series of disturbing revelations about the lawyers hired by Mueller that show the same level of bias, partisanship, and conflicts of interest.”

The text messages first came to light as the department’s Office of Inspector General conducted an internal review of the FBI’s investigation of Hillary Clinton’s use of a private email server to conduct official business as secretary of state from 2009 through 2012.

Clinton, the Democrats’ 2016 presidential nominee, was cleared before the election of any criminal activity by then-FBI Director James Comey, who Trump fired less than four months into his presidency.

The dates of the text messages by Strzok and Page range from August 2015 to December 2016, according to The Washington Times and other media outlets that obtained copies. Fox News Channel reported that officials were reviewing more than 10,000 messages.

Republican lawmakers noted that Strzok was lead investigator in the probe of Clinton’s secret email setup, and identified him as the one who urged Comey to use the words “extremely careless” rather than the legally weighted “grossly negligent” to describe Clinton’s email practices as secretary of state.

Mueller removed Strzok from his investigative team about five months ago, in July, after learning of the text messages. Strzok was in charge of the FBI’s investigation into Clinton’s private email server prior to joining Mueller’s team.

Page, the FBI lawyer, also served on Mueller’s investigative team, but by the time Inspector General Michael E. Horowitz’s probe uncovered the text messages, she had returned to other duties at the FBI.

Strzok and Page referred to Trump as an “idiot” during the Republican primaries, the text messages show. Other exchanges indicate that the pair supported Clinton for president over Sen. Bernie Sanders, I-Vt., in the Democratic primaries.

Politico noted a March 2016 text in which Page declared: “God trump is a loathsome human…omg he’s an idiot.”

“He’s awful,” wrote back Strzok, who also texted that Trump was an “idiot” in another exchange.

House Judiciary Chairman Bob Goodlatte, R-Va., expressed concern about partisan inclinations within the Justice Department and FBI in a statement he released during the oversight hearing, when committee members questioned Rosenstein about the text messages, the Russia probe, and the Clinton email investigation.

“Reports on the political predisposition, and potential bias, of certain career agents and department lawyers on Special Counsel Mueller’s team are deeply troubling to all citizens who expect a system of blind and equal justice,” Goodlatte said. “DOJ investigations must not be tainted by individuals imposing their own political prejudices. We are now beginning to better understand the magnitude of this insider bias on Mr. Mueller’s team.”

Rosenstein looked down during much of the litany of Strzok’s apparent conflicts in the texts cited by Rep. Trey Gowdy, R-S.C., a former prosecutor who asked the deputy attorney general what he should tell his constituents (beginning at 3:20 in this video):

Rosenstein appointed the former FBI director as special counsel after Attorney General Jeff Sessions recused himself from the Russia probe because of his advisory role in the Trump campaign. The deputy attorney general repeatedly defended Mueller’s investigation during the hearing from Republican lawmakers who cited evidence of political bias on the part of key investigators.

“How with a straight face can you say that this group of Democrat partisans are unbiased and will give President Trump a fair shake?” Rep. Steve Chabot, R-Ohio, asked at one point.

“This guy thought he was super agent James Bond at the FBI,” Rep. Jim Jordan, R-Ohio, said of Strzok, pointing to texts in which Strzok appeared to see it as his mission to protect the nation from Trump.

Jordan said Americans have lost trust in Mueller and the Russia investigation, and Rosenstein ought to disband it and begin to probe efforts within Justice and the FBI to undermine Trump as president.

The inspector general at Justice is doing that already, Rosenstein repeated.

“What’s it going to get to get a second special counsel to answer these questions?” Jordan shot back. In his statement, Goodlatte specified major issues with the special counsel’s probe of possible coordination between Trump campaign operatives and Russian officials:

First, we have FBI agent Peter Strzok and FBI lawyer Lisa Page exchanging communications showing extreme bias against President Trump, a fact that would be bad enough if it weren’t for the fact that these two individuals were employed as part of the Mueller ‘dream team’ investigating the very person for whom they were showing disdain.

And calling it mere ‘disdain’ is generous. According to the documents produced last night to this committee, Mr. Strzok and Ms. Page referred to the president as ‘an utter idiot,’ ‘a loathsome human,’ and ‘awful,’ while continually praising Hillary Clinton and the Obamas.

These text messages prove what we all suspected: High-ranking FBI officials involved in the Clinton investigation were personally invested in the outcome of the election, and clearly let their strong political opinions cloud their professional judgment. And this was only an ‘initial disclosure,’ containing heavy redactions.

Second, former embattled FBI general counsel and current Mueller prosecutor, Andrew Weissmann, expressed his ‘awe’ of a former DOJ official [acting Attorney General Sally Yates] for shunning the president and failing to faithfully execute the law. However, we are the ones now in ‘awe’ that someone like Mr. Weissmann remains on an investigative team that looks more and more partisan.

Third, we have learned that a top Mueller prosecutor, Jeannie Rhee, in addition to other actions that would normally justify recusal, served as an attorney for the Clinton Foundation. Aren’t DOJ attorneys advised to avoid even the ‘appearance of impropriety?’ A former Clinton employee is now investigating President Trump. This seems to be the very definition of  ‘appearance of impropriety.’

Fourth, we just recently learned that another top DOJ official, Bruce Ohr, has been reassigned because of his and his wife’s connections with the infamous [Trump] ‘dossier’ and the company [Fusion GPS] from whom the opposition research document originated.

Tom Fitton, president of Judicial Watch, a Washington-based nonprofit that promotes “integrity, transparency, and accountability in government,” released a YouTube statement Tuesday about what he said were “anti-Trump and pro-Hillary text messages.”

Fitton called on the Justice Department to respond to Judicial Watch’s related requests under the Freedom of Information Act.

“We are getting the runaround from this Justice Department and this FBI in our Freedom of Information Act lawsuits,” he said. “The coverup and secrecy must end. We want the documents now.”

The Justice Department did not respond to The Daily Signal’s request for information Wednesday on any policy or guidelines governing text messages and other mobile messaging on government devices, and for a comment on whether the Russia probe is undermined by political bias.

Heritage’s von Spakovsky told The Daily Signal in an email that Rosenstein should revoke Mueller’s authority to pursue Russia-related questions since there are too many “conflicts of interest” at work.

How can you have lawyers working on this special investigation who represented the Clinton Foundation; represented the IT staffer who installed the home server; attended Hillary’s election eve party; supported [acting Attorney General] Sally Yates’ unprofessional and unethical behavior? All of this raises serious questions about Mueller and the lawyers he has hired and his lack of judgment. The work of this special counsel seems to now be irretrievably suspect.

After revoking Mueller’s authority, von Spakovsky said, Rosenstein “should ask the Criminal Division of the Justice Department and its career prosecutors to investigate the very narrow issue of Russian election collusion.”

In response to questions from Rep. Jerrold Nadler, D-N.Y., ranking member of the Judiciary Committee, Rosenstein said he had not seen any “good cause” to fire Mueller (beginning at 3:20 in this video):

James Duane, a law professor at Regent University, told The Daily Signal that the content and tone of the text messages by the two FBI agents will make it easier for the president to say the results of the Mueller investigation are tainted.

“These clumsy and careless disclosures by those agents of their personal animosity toward President Trump will make it 10 times easier for Trump — even if only in his own mind, and in the minds of his most loyal supporters — to justify the decision to pardon anyone who is prosecuted by this supposedly independent investigative team,” Duane said in an email.

“If Trump decides to issue pardons for such individuals, I guarantee that these derogatory text messages will figure prominently in his public explanation of the reasons for his decision.”

During the hearing, Democrats—Reps. Hank Johnson of Georgia and Eric Swalwell of California among them—asked Rosenstein whether Trump ever interfered with investigations.

“I told you I have never received any improper orders,” Rosenstein snapped to Johnson at one point.

“Are you afraid of President Trump firing you?” Johnson asked.

“No, I am not,” Rosenstein replied.

Other Democrats cast Republicans as running down the professionalism of the FBI and Justice Department.

In response to questions from Rep. Steve Cohen, D-Tenn., Rosenstein made an emotional defense of Mueller’s reputation, record, resume, and experience.

“I believe he was an ideal choice for this task,” Rosenstein concluded.

This report has been modified to add videos of Gowdy and Nadler, and to add the quote from Duane.