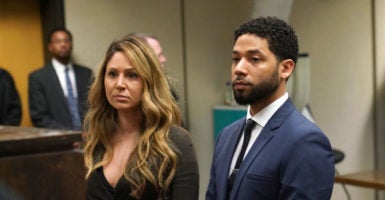 “FBI & DOJ to review the outrageous Jussie Smollett case in Chicago,” Trump tweeted Thursday. “It is an embarrassment to our Nation!”

FBI & DOJ to review the outrageous Jussie Smollett case in Chicago. It is an embarrassment to our Nation!

Charges against Smollett were dropped Tuesday.

The “Empire” actor agreed to do community service and forfeit his $10,000 bond in exchange for prosecutors dropping charges accusing him of creating a hoax hate crime against himself.

“The charges were dropped in return for Mr. Smollett’s agreement to do community service and forfeit his $10,000 bond to the City of Chicago,” the Cook County State’s Attorney Office told The Daily Caller News Foundation. “Without the completion of these terms, the charges would not have been dropped.”

Smollett claimed he was attacked, doused with an unknown chemical substance, and had a rope tied around his neck by two men on Jan. 29. Police, however, classified Smollett as a suspect on Feb. 20 for allegedly filing a false report.