How a New Power Plant Could Enhance US-Kosovo Relations 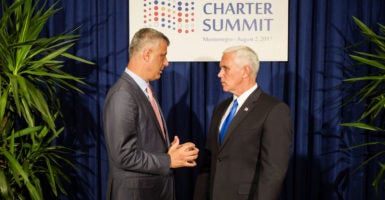 The Republic of Kosovo and New York-based power generator ContourGlobal signed a deal Wednesday for the U.S. company to build a 500-megawatt, coal-fired power plant, the first major energy project in the Balkan country in more than two decades.

Under the $1.5 billion contract, the power plant would replace the “Kosovo A” plant, built in 1962 under the communist Yugoslavian regime. The old, government-owned plant has been distinguished by the World Bank as one of the worst sources of pollution in Europe.

Indeed, Kosovo’s power plant modernization in partnership with the American company is an important step forward, not only in securing much-needed energy supplies for Kosovars but in advancing the U.S.-Kosovo relationship.

Since declaring its independence from Serbia in 2008, Kosovo has made notable progress toward stability and development. The once conflict-torn nation has been transitioning, albeit gradually, to a country that stands firmly for “stronger democracy, greater freedom, and growing economic potential.”

According to The Heritage Foundation’s Index of Economic Freedom, Kosovo’s progress toward an open, market-based economy continues, although lingering institutional shortcomings related to the rule of law put downward pressure on its competitiveness.

In a challenging regional economic environment, however, the landlocked economy has outperformed its neighbors.

Read more about Kosovo Economy.
See more from the 2017 Index.

Despite progress, Kosovo’s overall economic development has been notably disadvantaged by lack of a reliable, affordable, and modern supply of energy. Reforming and modernizing the energy sector is a top priority for Kosovo, whose economic growth has been hamstrung by frequent power cuts and an exceptionally high number of energy shortages.

Entrepreneurs and potential investors identify the unreliable energy supply and poor access to electricity as major obstacles to their day-to-day operations and a severe constraint to business expansion. Indeed, more than anything else, the high frequency of power outages and the poor condition of existing power plants have hurt the livelihood of the people of Kosovo.

Building a modern, efficient power plant in Kosovo also offers a unique opportunity to reinforce the young democracy’s evolving bilateral relationship with the U.S. It is further strengthened by the recent signing of a $49 million economic development program with the Millennium Challenge Corporation, a federal agency.

Kosovo has been invited to develop project proposals for U.S. grant agreements that must present a strong case for entrepreneurial growth led by the private sector.

The U.S. was one of the first countries to recognize Kosovo’s independence. Since then, the U.S. has urged other countries to extend diplomatic recognition.

During a meeting with Kosovo President Hashim Thaci at the White House in late September, Vice President Mike Pence unambiguously reconfirmed U.S. support “for a sovereign, democratic, and prosperous Kosovo.”

For all the challenges behind and ahead, Kosovo has been moving forward. Ensuring affordable and widely available energy is an essential building block of facilitating that ongoing progress of economic growth and development.

Securing efficient, reliable energy supplies will be a big step, to which Kosovo’s new deal with ContourGlobal makes an important contribution.