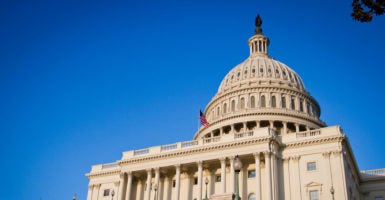 In September, the House unanimously passed three amendments that would cut off funding for an "adoptive forfeiture" directive from the Justice Department. (Photo: iStock Photos)

Krista Chavez is a member of the Young Leaders Program at The Heritage Foundation.

Members of Congress brought renewed attention to a legislative effort to halt efforts by the Department of Justice to restart one of the most controversial civil forfeiture practices, so-called “adoptive” forfeitures.

The practice, part of the equitable sharing program, allows state and local law enforcement to seize property in their jurisdictions and then hand it over to federal agencies to conduct the forfeiture. In return, the original seizing agency then receives up to 80 percent of the proceeds if the forfeiture is successful.

In 2015, the Justice Department essentially halted this type of forfeiture amid growing concerns that it gave police and sheriffs a financial incentive to circumvent state laws when federal law made it easier to seize assets. Some state laws are more protective of property rights and more restrictive in how forfeiture funds can be raised and spent than federal law.

That move prompted pushback from lawmakers. Led by Reps. Tim Walberg, R-Mich., and Justin Amash, R-Mich., a bipartisan group of House members sought to put a stop to Sessions’ actions by blocking funding for the program.

In September, the House unanimously passed three amendments to the Make America Secure and Prosperous Appropriations Act, to cut off funding for the implementation of Sessions’ directive.

House and Senate negotiators are now working to develop a final funding package that both chambers can pass and send to the president. With those negotiations under way, Walberg and a bipartisan group of 27 other representatives signed a letter encouraging Reps. John Culberson, R-Texas, and Jose Serrano, D-N.Y., chairman and ranking member of the Appropriations subcommittee on commerce, justice, science, and related agencies, to include the amendments’ language in the final bill.

“These amendments, which were adopted by voice vote, were championed by a diverse group of lawmakers and supported by a broad coalition of organizations, including the American Conservative Union, the Institute for Justice, the NAACP, and the ACLU,” the group noted in the letter.

This broad, bipartisan support for reining in civil forfeiture is reflected in the population at large. One recent poll found that 84 percent of Americans oppose forfeiture of property without a criminal conviction.

This effort to use the appropriations process to halt the expansion of civil forfeiture is a reminder that, in our constitutional system, the power of the purse rests with Congress.

Vesting the legislature with control over the treasury was no accident of constitutional design. The Framers intended it to be an essential mechanism for holding the government accountable to the people through their elected representatives.

Civil forfeiture has been roundly criticized for undercutting this basic premise of good government. Revenues generated through forfeiture may be spent with virtually no oversight. Funds distributed to local or state agencies via the equitable sharing program are similarly beyond the reach of state or local lawmakers.

Perhaps this lack of accountability explains how funds supposedly reserved for “law enforcement purposes” wind up getting spent on margarita machines, training trips to Hawaii, and chrome accents for Harley Davidson motorcycles.

As one of our Founding Fathers, George Mason, put it, “When the same man, or set of men, holds the sword and the purse, there is an end of liberty.”

Civil forfeiture may not quite be the end of liberty, but it has certainly blurred the boundary between the men who wield the government’s sword and those who manage its purse. Innocent property owners have paid the price.

That’s why, in the last three years, 25 states and the District of Columbia have reined in or eliminated civil forfeiture. Many have restricted or outright prohibited their law enforcement agencies from raising and spending forfeiture revenues.

Adoptive forfeitures, and the entire equitable sharing program, undercut these positive developments and run counter to the principle of federalism by undermining state efforts to ensure greater fairness, accountability, and transparency to forfeiture process.

Throughout American history, Congress has used its appropriations authority to advance key policy priorities, as well as to restrain executive agencies. For example, in 2014, Congress stopped funds from being used to bring Guantanamo detainees to the United States.

In that same spirit, Congress should now act to bolster state civil forfeiture reforms by defunding the adoptive forfeiture directive. That move would be a modest, but significant, development, and would send a clear signal that Congress has little appetite for the expansion of civil forfeiture, especially when it overrides sensible state reform efforts.

It may even help to set the stage for more expansive action on civil forfeiture.

To that end, The Heritage Foundation has developed nine critical civil forfeiture reforms, including ending the forfeiture financial incentive and the equitable sharing program. Many of these proposals have been incorporated into two pieces of legislation now before Congress—the FAIR Act and the DUE PROCESS Act.

Now is the time to begin bringing greater oversight, accountability, and transparency to civil forfeiture. Defunding adoptive forfeitures is a good first step.