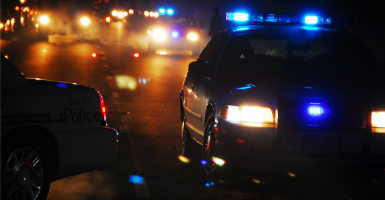 The Equitable Sharing Program was suspended late last year for budgetary reasons, but was restarted by the Justice Department earlier this month. (iStockPhoto)

A new report from the Justice Department found that a police department located in a Chicago suburb used nearly $1 million it received from a controversial government program to buy items including motorcycles, a Chevy Camaro, and a boat, raising further questions about whether the program should exist at all.

The Equitable Sharing Program was suspended late last year for budgetary reasons but was restarted by the Justice Department earlier this month.

“The excess and deficiencies of the Willow Springs Police Department are symptoms of a larger problem,” Jason Snead, a policy analyst at The Heritage Foundation, told The Daily Signal. “The lack of transparency, oversight and accountability in how equitable sharing funds are spent allow for this sort of ridiculous purchase.”

In its audit, the Justice Department’s Office of the Inspector General reported that the Willow Springs Police Department spent more than $116,000 it received from the Equitable Sharing Program to purchase 13 vehicles, some of which were used sparingly, including two Harley Davidson motorcycles, a 2013 Chevy Camaro, and a 2013 Ford F-250.

The police department also used money from the program to fund overtime and payroll costs and purchase computer equipment, Tasers, and office furniture.

Each of the motorcycles the department bought was further outfitted with new wheels, exhaust, chrome upgrades, and heated handgrips, and driven 512 and 799 miles, respectively. The Justice Department, noting the $23,562 cost to adding upgrades to the Harley Davidsons, called them “unnecessary.”

Not only did the government find that the motorcycles were used sparingly, but the Chevy Camaro the Willow Springs Police Department purchased with Equitable Sharing funds registered only 518 miles on its odometer as of July 2015. The police department bought the car, which the government said was a “pursuit car,” in June 2014.

Though officials with the Village of Willow Springs did not refute the purchase of the Camaro—and the use of equitable sharing payments to buy it—the law enforcement agency did disagree with the characterization of the car as a “pursuit vehicle.” Instead, town officials said the Camaro was used for “covert operations” that do “enhance law enforcement operations.”

According to town officials, who responded to the Justice Department’s audit, the police department bought the Ford Expedition for its former police chief. Though the SUV was a “civilian model,” it was “fully loaded.”

The boat, bought primarily with a grant awarded by the Department of Homeland Security, was intended to be used for patrolling the Des Plaines River, according to the Justice Department.

Under the Justice Department’s Equitable Sharing Program, participating law enforcement agencies seize cash, cars, and property under federal asset forfeiture laws, which experts like Snead say allows police departments to circumvent state laws that are oftentimes more strict. Through their participation in the program, agencies keep up to 80 percent of forfeiture proceeds, with the remaining money going to the federal government.

Civil asset forfeiture is a tool that gives law enforcement the power to seize property, cash, and cars if they suspect they’re tied to a crime. In some instances, the property owner is never charged with a crime.

Many who advocate for reforming civil asset forfeiture laws at both the state and federal levels point to the Equitable Sharing Program as one aspect in need of changing.

Under the controversial program, police departments must use the money they receive for “law enforcement purposes,” which civil asset forfeiture opponents argue is vague and can lead police departments nationwide to purchase unnecessary items.

“Law enforcement agencies that receive these funds do not have to justify their purchases or expenses to elected legislators or the public. It is only via audits, sometimes years after the fact, that the public ever finds out about any improprieties,” Snead said.

“That makes it all the more likely that waste and abuse will continue to occur—if not in Willow Springs, then in the countless other agencies that partner with DOJ to get their share of the hundreds of millions of dollars of forfeiture funds doled out each year,” he continued.

Snead warns that the Equitable Sharing Program furthers the profit incentive that he believes civil forfeiture creates, as law enforcement agencies can use forfeiture dollars to pad their budgets, particularly in times when funding may be cut.

“It is ironic that earlier this week, DOJ heralded the return of equitable sharing payments by stating that law enforcement agencies desperately need these funds for critical law enforcement operations,” Snead said, “yet only days later, the DOJ I.G. is noting that this agency spent $67,000 on chrome-accented motorcycles it barely uses.”