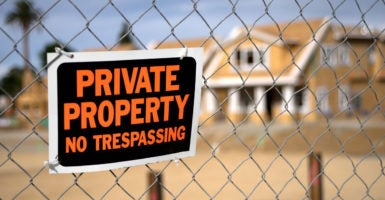 Three amendments to a recent appropriations bill, if signed into law, will prevent the Justice Department from resuming the controversial "adoptive forfeiture" program. (Photo: iStock Photos)

The House of Representatives has moved to defund the controversial civil forfeiture practice known as “adoptive” seizures.

Last week, lawmakers voted overwhelmingly to approve three amendments to the Make America Secure and Prosperous Appropriations Act, all of which would prevent federal funds from being used to implement Attorney General Jeff Sessions’ July order to restart adoptive forfeitures.

This makes the 2018 appropriations bill—which passed the House last Thursday—one of the most significant federal legislative actions on civil forfeiture in years.

Adoptive forfeiture is the process by which property allegedly tied to criminal wrongdoing can be seized by state and local law enforcement officials, and then handed off to federal authorities for forfeiture under comparatively lax federal law.

If a forfeiture is successful, the original seizing agency can expect to receive up to 80 percent of the resulting proceeds through the “equitable sharing” program.

This program has come under tremendous pressure in recent years as states began to rein in civil forfeiture, afford property owners greater due process protections, and restrict how much forfeiture revenue may be retained by local law enforcement authorities and how those funds may be spent.

Critics contend that adoptive forfeitures made it all too easy for local and state agencies to circumvent these protections. One 2011 study concluded that an inverse relationship exists between state forfeiture laws and federal equitable sharing payments—that is, the more a state attempts to limit police self-financing, the more agencies turn to federal forfeiture to make up the shortfalls.

Former Attorney General Eric Holder responded to this critique in 2015 by barring most adoptive forfeitures. In July, citing the need to combat ongoing violent and drug-related crime, Sessions ordered that adoptions be reinstated.

It is certainly refreshing to hear an attorney general speak candidly of the need to support our law enforcement officials as they do the difficult and dangerous job of safeguarding society. But restarting adoptive forfeitures—even with the limitations and protections described in Sessions’ order—is a step in the wrong direction.

>>> As Justice Department Ramps Up Fight Against Violent and Drug Crime, Property Owners Put at Risk

It is impossible to ignore the alarming effect of the financial incentive, which has led some law enforcement agencies to treat forfeiture as a revenue-generating tool. The result has been the seizure of cash and property from innocent people, and the release of likely criminals in exchange for the funds in their possession.

The decision by the Justice Department to begin adoptive forfeitures anew came amid a nationwide sea change in attitudes toward civil forfeiture. After ramping up civil forfeiture at the state and federal levels for decades, 24 states have adopted measures restricting the practice, or banning it altogether.

Earlier this year, Justice Clarence Thomas dissented from the Supreme Court’s refusal to hear a case challenging the constitutionality of modern forfeiture law. He noted he was “skeptical” that the limited practice of civil forfeiture known to the Founders could support, “as a constitutional matter, the contours of the modern practice.”

Now, federal lawmakers are taking aim at forfeiture as well.

Last week, the House passed the Clyde-Hirsch-Sowers RESPECT Act to bar the detestable IRS practice of seizing money not because it was earned illegally, but because the funds were “structured” into payments of less than $10,000 to avoid financial reporting requirements—even though there may be perfectly legitimate business reasons to make regular deposits in amounts less than $10,000.

The bill, named for three small business owners who collectively lost hundreds of thousands of dollars simply because the funds were “structured,” would require that prosecutors demonstrate probable cause that seized funds are either illegally earned or structured to conceal illegal activity before they can proceed with a forfeiture case.

The passage of the RESPECT Act was followed up with three separate amendments to an appropriations bill defunding the attorney general’s adoptive forfeiture order.

The first, by Rep. Justin Amash, R-Mich., prohibits funding for any seizure or forfeiture activity that would violate the 2015 order put in place by Holder.

Two others, introduced by Reps. Tim Walberg, R-Mich., and Jamie Raskin, D-Md., prohibit the use of funds to implement Sessions’ directive that rescinded the 2015 order.

All three amendments, as well as the RESPECT Act, passed the lower chamber on a voice vote, which signals broad—indeed, virtually unanimous—support for a measure among lawmakers.

This bodes well for the future of forfeiture reform in Congress.

Two other measures have been introduced in both the House and Senate. The FAIR Act would eliminate the financial incentive in forfeiture law, including the equitable sharing program. The DUE PROCESS Act, meanwhile, concentrates on strengthening due process protections for innocent property owners, helping to rebalance a system that is stacked against them in every meaningful way.

After months of inaction, the last two weeks have proven that there remains cause for optimism in the fight for civil forfeiture reform.