As Justice Department Ramps Up Fight Against Violent and Drug Crime, Property Owners Put at Risk 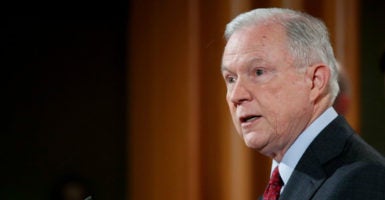 This week, the Department of Justice unveiled a new directive ramping up federal civil forfeiture.

Drug dealing is harmful to society. To many, the phrase “nonviolent drug offender” is an oxymoron, since drug dealing is often carried out by gangs, and almost invariably involves the actual or threatened use of violence and the inherent risk of overdose.

Moreover, the nation is currently reeling under the weight of an opioid crisis that has given rise to a surging heroin market.

As Sessions noted recently in a speech to the National District Attorneys Association, “more than 50,000 died from drug overdoses in 2015. Preliminary numbers indicated 2016 may hit 60,000. We have never seen numbers like this.”

Shootings and violent crime in many major cities have spiked in recent years, perhaps portending a reversal of a decadeslong decline in crime rates. Meanwhile, members of the law enforcement community have found themselves under attack—often, sadly, with lethal consequences.

In this atmosphere, it is refreshing to hear a president speak of the need to enforce the law and “break the cycle of violence.”

It is equally uplifting to see an attorney general committed to, as Sessions described it, using “every lawful tool that we have to do that.”

Unfortunately, one of the “lawful tools” Sessions has decided to turn to is “adoptive” forfeiture, a process whereby state and local law enforcement officials seize property that is allegedly tied to violations of state drug laws, hand it off to the federal authorities for forfeiture under comparatively lax federal law, and then wait to receive up to 80 percent of the proceeds derived from the forfeiture.

It is a noble objective to seek to deprive drug dealers of their ill-gotten gains and of the property and other instrumentalities that they use to facilitate and ply their vile trade.

As Sessions told the attendees at the National District Attorneys Association conference, “[n]o criminal should be allowed to keep the proceeds of their crime.” We agree.

That having been said, there are a number of problems with current civil asset forfeiture procedures and policies that cannot be ignored.

Property is often seized and forfeited even though nobody is ever charged with, much less convicted of, a crime. Law enforcement authorities are often able to retain the proceeds of forfeiture with little transparency or accountability as to how they use those funds.

In many cases, it has even resulted in the release of suspected criminals in exchange for the funds they have in their possession.

The current federal legal landscape is heavily stacked in favor of the government and against innocent owners who must, in essence, prove their innocence of any knowledge of wrongdoing before getting their property back—a difficult undertaking.

He stated that he was “skeptical” that current civil asset forfeiture practices are constitutional, and continued:

This system—where police can seize property with limited judicial oversight and retain it for their own use—has led to egregious and well-chronicled abuses. … These forfeiture operations frequently target the poor and other groups least able to defend their interests in forfeiture proceedings. Perversely, these same groups are often the most burdened by forfeiture.

A recent report issued by the Justice Department’s Office of Inspector General added fuel to this fire. The report stated:

We found that the Department and its investigative component do not use aggregate data to evaluate fully and oversee their seizure operations … We do not doubt the financial and deterrent effect seizures can have on criminal organizations and that intelligence collected during seizure operations can assist investigations. However, without evaluating data more systematically, it is impossible for the Department to determine (1) whether seizures benefit law enforcement efforts, such as advancing criminal investigations and deterring future criminal activity, or (2) the extent to which seizures may present risks to civil liberties.

The Office of Inspector General examined 100 cash seizures by the Drug Enforcement Administration, including 85 that occurred as a result of interdiction operations at transportation hubs.

The inspector general noted that:

As disappointing as these numbers are, one suspects they are worse at the state and local level, where budgets are tighter and authorities are more dependent on forfeiture proceeds to supplement those budgets.

Indeed, seizures are often based on little more than a hunch by the seizing officer that the property may be connected to illegal activity, with little if any actual evidence to support the seizures.

As a deputy sheriff in Kane County, Illinois, once wrote in a forfeiture training manual, “[a]ll of our home towns are sitting on a tax-liberating gold mine.”

In light of such criticisms, according to the Institute for Justice, 24 states plus the District of Columbia have either abolished or substantially reformed their own civil forfeiture laws to increase the burden of proof that law enforcement officials must meet, improve the protections afforded to innocent owners, and restrict the uses to which forfeiture funds may be put—that is, if agencies are permitted to retain those funds at all.

To its credit, the Justice Department’s new directive contains some important new safeguards to increase the likelihood that the property is in fact connected to criminal activity, and to lessen the likelihood of abuse.

The new directive requires agencies that participate in the department’s asset forfeiture program to provide annual training on state and federal forfeiture laws to their officers.

It also provides that legal counsel for the agency adopting the seized property must ensure that it complies with the law, “especially seizures made pursuant to an exception to the Fourth Amendment’s warrant requirement.”

Local and state agencies must also provide evidence that a seizure was made pursuant to probable cause, as required by federal law.

Adoptions of cash less than $10,000 will be granted “additional protections.”

Unless the seizure was made pursuant to a state warrant, incident to an arrest, or the simultaneous seizure of contraband relevant to the forfeiture, or if property owner or possessor admits to its illicit nature, adoption will be possible “only if the U.S. Attorney’s Office first concurs.”

These are welcome developments. Nonetheless, the resumption of the adoptive forfeiture program will, in all likelihood, enable law enforcement officials in those and other states to circumvent more restrictive state forfeiture laws and, as such, is an affront to principles of federalism.

And, of course, federal forfeiture procedures have also been criticized, even by those who support their overall enforcement objectives.

A bipartisan group of federal lawmakers has introduced legislation, including the FAIR Act and the DUE PROCESS Act, aimed at curbing federal forfeitures and rectifying some of the current imbalances that exist.

In some cases, civil forfeiture may be an appropriate tool to use in the ongoing battle against drug and organized crime. That was the reason that forfeiture was ramped up in the 1980s: to target the assets and ill-gotten gains of the worst-of-the-worst categories of offenders.

Getting back to that original, narrow, and laudable goal is a worthwhile venture. Criminals, after all, should absolutely not be able to retain the proceeds of their illicit activities.

But neither should the government be permitted to take assets from individuals it has not satisfactorily tied to criminal activity. Arresting, charging, and convicting those suspected of criminal activity should remain the No. 1 focus of law enforcement officials.

Despite the additional protections called for by Sessions, the prospect for abuse of civil forfeiture remains too great to ignore. Given this new policy, it is time for Congress to intervene and provide innocent property owners the legal protections they deserve.