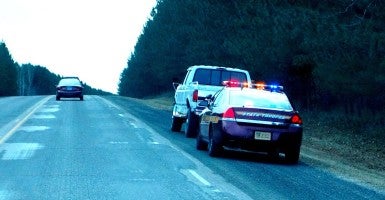 A multi-county grand jury has indicted Oklahoma Sheriff Bob Colbert and Captain Jeffrey Gragg on three felony counts of bribery and extortion and recommended that Colbert be removed from office. The sheriff, according to the indictment, conspired with a captain in his office to extort $10,000 from a driver arrested on suspicion of possessing drug proceeds. It’s a development that could reshape the caustic fight to reform civil asset forfeiture laws in Oklahoma.

Civil forfeiture laws allow law enforcement officials to seize cash and property suspected to have been involved in, or to be the direct result of, illegal activity. No criminal charges need to be filed, nor any convictions obtained. In fact, in most states and at the federal level, the owner is responsible for essentially proving his own innocence if he wants to win back his cash, home, or car.

The charges filed against Colbert and Gragg stem from a 2014 traffic stop in which Gragg, while searching the vehicle, discovered $10,000 in cash. According to the indictment, he then contacted Colbert to advise him of the cash find. Colbert arrived on scene shortly thereafter.

When questioned, the driver of the car, Torell Wallace, and his 17-year-old passenger both claimed ownership of the funds, at which point Gragg placed them under arrest for felony possession of drug proceeds. Shortly thereafter, Wallace informed Gragg that he was on parole and wanted to know how he could avoid going to jail. Gragg allegedly told Wallace that, to quote the indictment, “the only way [he] was going to go home that day was to disclaim his ownership in the $10,000.”

You read that right: A law enforcement officer offered to release a suspected criminal in exchange for a $10,000 payment.

You read that right: A law enforcement officer offered to release a suspected criminal in exchange for a $10,000 payment that, under Oklahoma forfeiture laws, would become pure revenue for the sheriff’s department. And that is exactly what happened.

Wallace agreed to give up the money. After signing the appropriate paperwork, Colbert allowed both Wallace and the minor to leave, no charges filed. Colbert then allegedly ordered their jail records to be destroyed, and the next day, Gragg deposited the $10,000 in a special forfeiture account. Wallace was later arrested in Missouri for the distribution of methamphetamine and is now awaiting sentencing.

The problem is that under Oklahoma law, an agency that seizes property gets to keep the proceeds and spend the funds with shockingly little oversight. The ability to self-finance in this way—completely outside the normal political process—invites corruption, while the opacity of forfeiture financing makes it relatively easy to sweep any abuses under the rug.

It’s a system desperately in need of reform, but law enforcement groups in the Sooner State are having none of it.

In response to reform legislation put forward by State Sen. Kyle Loveless, R-Oklahoma City, police, sheriffs, and prosecutors went on the offensive, attacking Sen. Loveless personally and explicitly calling forfeiture reform an invitation to Mexican drug cartels and ISIS fighters to set up shop in the state. Besides, these groups insist, forfeiture reform is not necessary because in Oklahoma, abuses simply do not occur.

Perhaps this indictment will change their tune.

This is not the first time this sort of thing has happened. In Tennessee, for example, officers of the 21st Judicial District Drug Task Force were caught on their own dashboard camera pressuring the driver of a refrigerated truck to disclaim any interest in $500,000 in cash the officers had found plastic-wrapped and hidden throughout the vehicle. They did not question the driver about where the money came from; they only wanted the cash, and they offered him his freedom if he signed it over to them. He complied.

These shakedowns hit innocent people as well. In Tenaha, Texas, drivers passing through the remote town had their valuables taken, had their cash seized, and were then threatened with arrest and criminal charges if they did not immediately disclaim ownership of the property. In extreme cases, officers there even threatened to take children from their families to elicit cooperation. Such is the power of civil asset forfeiture to distort the priorities of law enforcement agencies.

When forfeiture proponents insist that civil forfeiture laws are the lynchpin in fighting crime, is this how they envision it operating? The bullying of innocent people into giving up their stuff? The casual release of suspected criminals in exchange for the money they have on them? Some may be able to rationalize it, but the grand jury called it what it is: extortion and willful neglect of duty.

The bribery and extortion charges against Colbert and Gragg are just that: charges. Per the norms and standards of the criminal justice system, they must be presumed innocent until proven guilty. Should they take their case to court, they will be guaranteed legal representation, and the state must prove its case beyond a reasonable doubt.

Innocent property owners caught up in the civil forfeiture system are seldom treated so fairly.