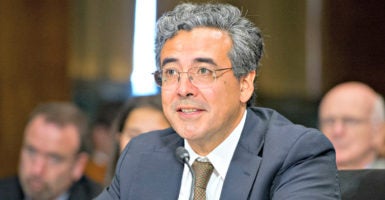 After racking up victories against the Obama administration before the Supreme Court, Noel Francisco is expected to be confirmed by the Senate to manage the Trump administration’s cases there.

“If you asked any conservative attorney in this town, they would put Noel in the top five legal minds,” @Curt_Levey says.

President Donald Trump nominated Francisco, who clerked for the late Justice Antonin Scalia and was a lawyer in the George W. Bush administration, to be his solicitor general.

A Senate committee approved the nomination four months ago. Democrats have stalled a final vote, but an end looks in sight.

While working in private practice for the Jones Day law firm, Francisco, 48, successfully argued before the Supreme Court against the constitutionality of President Barack Obama’s recess appointments to the National Labor Relations Board, winning a 9-0 decision.

He also gained a 4-4 tie at the high court after arguing for the Little Sisters of the Poor, a Catholic order of nuns, against Obamacare’s mandate requiring employers to cover contraception and abortion-inducing drugs in employee health plans.

In another widely publicized case that made its way to the high court, Francisco helped overturn the conviction of former Virginia Gov. Bob McDonnell, a Republican, on charges of public corruption.

“There are a number of very significant cases before the court and he is equal to the task for any cases before the Supreme Court,” John Malcolm, who heads the Institute for Constitutional Government at The Heritage Foundation, told The Daily Signal. “Noel Francisco is exceptionally bright and has impeccable character, and the nation will be well served to have him as solicitor general.”

Francisco, approved by the Senate Judiciary Committee on a party line, 11-9 vote in June, is one of many Trump nominees whom Senate Democrats have managed to prevent from coming to a final floor vote.

Carrie Severino, chief counsel and policy director for the Judicial Crisis Network, a conservative legal group, watched Francisco argue the NLRB v. Noel Canning case before the Supreme Court. The justices unanimously ruled the president could not make recess appointments—installing appointees without Senate confirmation—while the Senate was not officially in recess.

Severino said Francisco’s impressive record was on display in his actions as a litigator.

“This has been another shameful holdup by the Senate Democrats who dragged this nomination out much longer than necessary,” Severino told The Daily Signal. “Noel Francisco is very well-known attorney and a very skilled litigator.”

“I’m glad he’s on board,” she added, “but we are still moving at a pace of confirmation that it would take three terms to confirm all of this administration’s nominees.”

The U.S. solicitor general works in the Justice Department, charged with managing the defense of the federal government’s cases in front of the Supreme Court. In many cases, the solicitor general argues the case.

Francisco grew up in Oswego, New York. Francisco received his law degree from the University of Chicago in 1996. He clerked for Judge J. Michael Luttig of the U.S. Court of Appeals for the 4th Circuit before clerking for Scalia at the Supreme Court.

Bush named Francisco as associate counsel to the president. He served in the White House from 2001 to 2003 before becoming deputy assistant attorney general in the Office of Legal Counsel at the Justice Department until 2005.

Francisco lives in Washington with his wife Cynthia and their two daughters, Caroline and Maggie.

“If you asked any conservative attorney in this town, they would put Noel in the top five legal minds,” said Curt Levey, president of the Committee for Justice and a legal affairs fellow with FreedomWorks, both conservative organizations.

“Given the resistance to Trump in the federal courts, almost everything could be dealt a blow by a district court somewhere, it’s important to have someone with executive branch experience, and it’s more important than ever for not only the country but for this administration,” Levey told The Daily Signal.