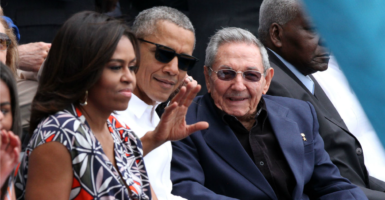 Everything regarding Cuba that President Barack Obama, shown here with Raul Castro, announced the past two years can be rescinded come this Friday by Donald Trump. (Photo: Javier Lira/NOTIMEX /Newscom)

There seems to be something about Cuba’s military dictators that really fascinates our 44th president. Cuba was the first item President Barack Obama mentioned when he enumerated his foreign policy “achievements” in his farewell address; and with just a week to go, he has rushed anew to make concessions to the communists in Havana.

The concessions this time was to end what has been inelegantly known as “wet foot, dry foot.” This was a Bill Clinton-era amendment to Lyndon B. Johnson’s 1966 Cuban Adjustment Act that allowed Cuban escapees who touched U.S. dry land to stay, but turned back to Havana those caught at sea.

Ending wet foot, dry foot doesn’t end the Cuban Adjustment Act, but it does renders it moot in most ways. The act allows Cubans who have been in the U.S. for a year to receive permanent residency, while the Clinton amendment granted those who arrived through rafts or by crossing border a one-year temporary parole to wait for the act to kick in.

Absent the one-year parole, it is harder for the special concession granted those who escaped from the communist island to kick in.

Wet foot, dry foot was ripe for reform. It was replete with perverse incentives. For example, it enticed thousands of Cubans to take rafts to Central America, undertake a perilous journey through unstable countries, and then be smuggled across the U.S.-Mexico border.

Such is the desire to leave Castro’s “Socialist Paradise” that over 46,500 made across the Rio Grande in the last fiscal year, which ended Sept. 30. A smaller number undertook a dangerous voyage across the shark-filled 95-mile Florida isthmus on rafts sometimes even made out mattresses.

But the blanket approach that Obama took, as well as his decision to once again deal in secret with Havana, most probably through his deputy national security adviser Ben Rhodes, a Svengali-like figure at the White House, once again disappoints.

The fact of the matter is that the 85-year-old dictator Raul Castro knew more about this policy change just as it was about to be announced than did members of Congress or of Obama’s own State Department.

Obama also terminated the Cuban Medical Professional Parole Program, which allowed Cuban doctors sent overseas to apply for U.S. asylum in these third countries. Havana exploits its doctors and nurses, sending them abroad so the communist government can collect convertible currency on their behalf, a practice that has long been deplored.

But Castro hated it, because it gave his doctors a chance at freedom, so Obama obliged him. And that’s the thing about Obama: His apparent desire to please the octogenarian American-hater in Havana is only matched by his obvious disregard for the Cuban people’s legitimate desire for freedom.

He seems to forget that they are trapped inside an authoritarian military dictatorship. In his announcement, he once again said that “the future of Cuba should be in the hands of the Cuban people”—as if they lived in Ohio or the south of France.

There doesn’t seem to be any clear way that those persecuted for their political or religious beliefs can find a haven here.

Everything regarding Cuba that Obama announced not just Thursday but for the past two years can be rescinded come this Friday by President Donald Trump—along with much of the Obama legacy.

Sen. Marco Rubio of Florida, who poured scorn on Obama with his reaction to the announcement, made that clear by stating:

I had the opportunity to discuss this issue with Vice President-elect [Mike] Pence this evening, and I am heartened by the fact that in a week we will have a new administration committed to discarding the failed Cuba policy of the last two years.