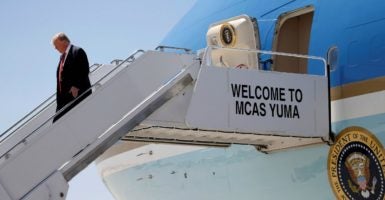 President Donald Trump toured the U.S. Customs and Border Protection outpost in Yuma, Arizona, ahead of his “Make America Great Again” rally in Phoenix on Tuesday, in a border state that has borne much of the country’s illegal immigration problem.

“He’s been massively successful in deterring anarchy at the border, and he’s done it by jawboning,” @RoyBeck_NUSA says.

Phoenix was the site of one of his early rallies in 2015, in a campaign that was based in large part on promising to combat illegal immigration.

The White House points to results, with illegal border crossings down by more than half since this time last year and the arrests of convicted criminal aliens up by about 20 percent during the same time period. Immigration and Customs Enforcement conducted about 40 percent more enforcement and removal operations, such as detentions or deportations, compared with the same time last year.

Critics have noted there were more deportations at the border last year, but the administration notes that is because of the decline of illegal border crossings.

Tom Homan, acting director of ICE, told reporters aboard Air Force One on Tuesday, “If you [were] lucky enough to get back past the Border Patrol, in the [previous] administration, you were home free, unless you committed another crime and get put in jail and get convicted of that crime.”

“Now, the message is clear: If you happen to get by the Border Patrol, someone is looking for you.”

ICE also removed more than 2,700 criminal gang members so far in fiscal year 2017, which began in October, according to White House numbers as of July 20. That’s compared with 2,057 criminal gang removals in the entire fiscal year of 2016.

“He’s been massively successful in deterring anarchy at the border, and he’s done it by jawboning, using the bully pulpit,” Roy Beck, president of NumbersUSA, an immigration reduction group, told The Daily Signal. “Come across the border, and the American people will take care of you. That used to be the story. He’s changed the story.”

However, Beck said Trump hasn’t done enough to curb the jobs magnet, by either prosecuting what he called “outlaw employers” or pushing to make E-Verify mandatory.

“The bully pulpit only works as long as it’s credible,” Beck added. “He gets an overall negative mark for dealing with the long-term problems, but in the short term, he has really cut down on illegal immigration.”

Here’s an overview of promises kept, progress on some, and what’s the holdup on others:

The wall was arguably Trump’s central campaign promise, and one of the biggest crowd pleasers with his audiences.

Trump’s fiscal year 2018 budget proposal calls for $1.6 billion as a down payment to pay for a double-layered wall across parts of the southern border with Mexico, with the long-term goal of having Mexico reimbursing the United States Treasury for the wall.

Days after taking office in January, Trump signed an executive order directing the Department of Homeland Security to immediately begin planning for “a physical wall on the southern border.”

Customs and Border Patrol posted a pre-solicitation notice asking for a request for proposal “for the design and build of several prototype wall structures in the vicinity of the United States border with Mexico.”

The wall is already authorized by the 2006 Secure Fence Act, but needs funding to build it. However, Senate Minority Leader Charles Schumer, D-N.Y., has threatened to shut down the government before funding the wall.

“The $1.6 billion is a pittance of what it will ultimately cost, but it costs $100 billion in benefits to illegal immigrants, so a wall will be a good investment,” Ira Mehlman, spokesman for the Federation for American Immigration Reform, which is tracking the status of Trump’s promises, told The Daily Signal.

The same day as Trump’s executive order for the wall, Jan. 25, the president signed a second order calling for the hiring of 5,000 new U.S. Border Patrol agents. However, the number of agents today is down by 220 compared with what it was when Trump took office, according to the Los Angeles Times.

The Times article noted problems in staffing for the Border Patrol since 2010, currently with 2,000 vacancies. Also, the agency has to increase screening for agents, according to recent audits by the Department of Homeland Security’s Office of the Inspector General.

Customs and Border Patrol would have to screen 750,000 applicants to hire an additional 5,000, according to an inspector general report released on July 17. Another inspector general report released on Aug. 4 found the agency spent more than $5 million to give polygraph tests to applicants that already admitted to committing crimes, which included illegal drug use, drug smuggling, human trafficking and rape.

“Hiring those border agents is going to be a significant challenge, regardless of funding and resources,” David Inserra, a homeland security policy analyst for The Heritage Foundation, told The Daily Signal.

Catch and release is when either ICE or Border Patrol would apprehend an illegal immigrant, then release the offender with a notice to appear in immigration court. The illegal immigrant often wouldn’t show up for the court date.

“The argument for catch and release is, there are only a finite number of jail cells and alternative detentions,” Inserra said.

The problem, he added, was that the Obama administration made that argument while at the same time pulling funding from detention facilities.

The state of California and the cities of San Francisco and Chicago have announced plans to sue the Trump administration for withholding some Justice Department grants from cities that refuse to cooperate with federal immigration enforcement officials.

Sessions was in Miami-Dade County, Florida, last week to praise jurisdictions for moving into compliance with the new Justice Department rules and to excoriate jurisdictions suing the federal government.

The Justice Department hasn’t withheld funds from any jurisdiction yet.

Mehlman says the policy needs to be codified through the Stop Dangerous Sanctuary Cities Act, with versions in both houses of Congress, sponsored by Sen. Pat Toomey, R-Pa., and Rep. Diane Black, R-Tenn., respectively.

“There needs to be real legislation,” Mehlman said. “[Trump] isn’t going to be president forever. We’ll be subject to the whims of a future president.”

However, in a split Supreme Court decision, DAPA essentially died last year when a lower court decision striking the policy down was upheld.

“The real question is DACA, which appears to be headed for a states’ [legal] challenge,” Inserra said. “If the administration doesn’t defend the policy, that would be a long way of canceling [it], through the courts.”

Mehlman, of the Federation for American Immigration Reform, said he expects that the Trump administration could attempt to offer an extension of DACA as a bargaining chip with congressional Democrats to pass a bill that would implement a merit-based immigration system.

As a candidate, Trump mostly talked about stopping illegal immigration. But earlier this month, the president backed a bill sponsored by Republican Sens. Tom Cotton of Arkansas and David Purdue of Georgia to shift from a family-based immigration system to a merit-based system. The bill, which would also limit legal immigration, is called the Reforming American Immigration for Strong Employment Act, or the RAISE Act.

Beck, of NumbersUSA, who was critical of Trump for not going after employers of illegal immigrants, praised the president for throwing the weight of the White House behind the RAISE Act.

However, the proposal is reportedly facing Republican skepticism or outright opposition from GOP Sens. Marco Rubio of Florida, John McCain and Jeff Flake of Arizona, and Lindsey Graham of South Carolina.

Courts have all but stopped Trump’s plans for extreme vetting, a policy that opponents call a “Muslim ban” because it affects majority-Muslim countries in the Middle East and Africa that lack a functional government.

On Jan. 27, Trump signed an executive order for a 120-day pause to temporarily block immigration from seven terrorism hot spots—Iraq, Iran, Syria, Libya, Sudan, Somalia, and Yemen. He issued a new order  in March, dropping Iraq from the list.

The Trump administration sought to suspend issuance of visas to any country where screening can’t occur. The policy is on its way to the Supreme Court.