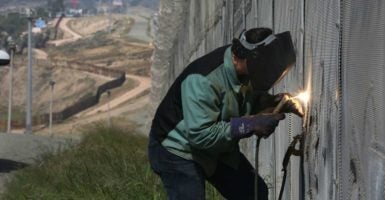 A welder fixes a damaged section of the border fence in California. (Photo: Peggy Peattie/TNS/Newscom)

President-elect Donald Trump has legal authorization to move forward on his core campaign promise of building a border wall; he just needs the money to do it.

Trump said he still intends to require Mexico to pay for the wall, but needs congressional appropriation to expedite the process.

The dishonest media does not report that any money spent on building the Great Wall (for sake of speed), will be paid back by Mexico later!

Here are four things to know about the border wall.

The Secure Fence Act of 2006 authorized a 700-mile, double-layered border fence along the U.S.-Mexican border to keep illegal immigrants from entering the United States.

The measure had broad bipartisan support and passed the House by a vote of 283 to 183 in September of that year. It then passed the Senate a couple of weeks later with a vote of 80-19. President George W. Bush signed the bill on Oct. 26.

“His campaign was about fulfilling the promise of the 2006 law,” @FAIRImmigration says.

A fence might seem short of Trump’s promise of a “big, beautiful, powerful wall.” However, Ira Mehlman, spokesman for the Federation of Americans for Immigration Reform, a pro-border enforcement group, said he believes it is essentially in line with Trump’s pledge.

“Fence or wall or barrier, he called for securing the border,” Mehlman told The Daily Signal. “His campaign was about fulfilling the promise of the 2006 law.”

2. How Much of the Wall Is Already Built?

The first layer of the planned double-layered wall is a little over half finished, as is much of the fence to stop vehicles, but the second layer still has a long way to go.

In May 2011, President Barack Obama asserted the border fence is “now basically complete” because the primary and vehicle fencing has been built. PolitiFact said this was “mostly false,” because the secondary fencing was such a key aspect of the fence. When finished, the complete wall is supposed to be wide enough to drive a truck between the two layers.

The Department of Homeland Security has completed 353 miles of primary pedestrian fencing, which runs directly along the border and is intended to prevent crossings on foot. The department also completed another 300 miles of vehicle fencing, which prevents motorized vehicles from crossing.

Mehlman said these May 2015 numbers on the wall are the most recent, and are about the same as the 2012 numbers regarding miles complete.

The cost of building that much of the existing fence was $2.3 billion, according to the Department of Homeland Security.

3. How Will Congress Pay for It?

Since Congress doesn’t have to pass a stand-alone bill for the wall, the Republican majority reportedly intends to make it part of an appropriations bill that must pass by the end of April. Most media reports are not putting a finite figure on the cost other than in the billions.

The most ambitious estimate was $11 billion, said Jessica Vaughan, director of policy studies at the Center for Immigration Studies, a pro-border enforcement think tank.

She told The Daily Signal she expected it would be less, adding that number is small compared to the estimated $50 billion taxpayers spend each year on illegal immigration costs, from crime to welfare benefits.

Since so many Democrats, including Senate Democratic Minority Leader Charles Schumer of New York, voted for the Secure Fence Act, Republicans reportedly believe they will have a political advantage in pushing the appropriation through. Further, Democrats won’t likely want to shut down the government over stopping the wall, according to Vaughan.

“I don’t think it will be politically difficult for Schumer or others to change their position on border security because so many have already done a total reversal on border security,” Vaughan said. “But shutting down the government, that is something they were severely critical of the Republicans for doing and this would be a popular bill.”

For now, the Trump transition team is not getting into specifics as to when the Mexican government would cover the cost of the wall.

“There will be ongoing discussions with Congress on how to fund and organize [the wall],” Trump transition team spokesman Sean Spicer told reporters Friday during a conference call.

The notion of getting some form of reimbursement from Mexico shouldn’t be outright dismissed, Vaughan said.

“It’s hard for me to see the Mexican government agreeing to write a check for the U.S. wall, but the Trump administration could find ways to extract revenue by withholding remittance, by seizing the assets of Mexican crime syndicates, or reducing foreign aid,” Vaughan said. “It’s not only Mexico. It could be other countries in Central America.”