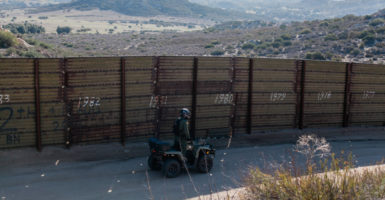 A Border Patrol agent rides an ATV in Campo, California, as he polices near the border fence that divides the United States and Mexico on Dec. 16. (Photo: Ariana Drehsler/UPI/Newscom)

After three days, a GoFundMe page started by a Purple Heart recipient to help pay for a border wall has more than $6 million from more than 100,000 people as of this writing.

This comes as Congress appears unlikely to give President Donald Trump the funding he wants to help pay for his key campaign promise.

The $5 million raised so far represents just 0.5 percent toward reaching the goal of $1 billion, and 0.12 percent of the $5 billion wall. Still, the large donor base in a short time seems to indicate the border security wall to curb illegal immigration still strongly resonates with much of the public.

Checking the page each hour demonstrates a significant increase in donations.

Neither the White House nor the Department of Homeland Security responded to inquiries from The Daily Signal.

The page was started by Air Force veteran Brian Kolfage, a triple amputee veteran and Purple Heart recipient. The GoFundMe pages maxes out campaigns at $1 billion. But, Kolfage supports fully paying for the wall if possible.

“If the 63 million people who voted for Trump each pledge $80, we can build the wall,” Kolfage wrote on the GoFundMe page. “That equates to roughly 5 Billion Dollars, even if we get half, that’s half the wall. We can do this.”

He noted that his grandparents were immigrants who entered the United States legally.

“As a veteran who has given so much, 3 limbs, I feel deeply invested to this nation to ensure future generations have everything we have today,” Kolfage wrote. “Too many Americans have been murdered by illegal aliens and too many illegals are taking advantage of the United States taxpayers with no means of ever contributing to our society.”

He noted on Twitter that there is precedent for private investment to build public projects.

People who say we cant fund the wall privately are DEAD WRONG!
A billionaire funded half the repairs of the Washington Monument for millions!#GoFundTheWallhttps://t.co/NzrgcxGg5F

Earlier this month, Trump threatened a partial government shutdown if he could not get funding for the wall. However, White House officials have indicated the president wants a compromise.

The Senate passed a bill to fund the government through February on Wednesday to avert a partial government shutdown. House Freedom Caucus members have said they will push for wall funding.