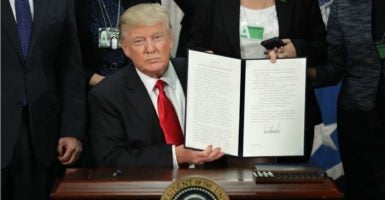 President Donald Trump signed two executive orders Wednesday following through on his signature issue of illegal immigration. The first provides for building a wall along the southern border, and the second for beefing up enforcement inside the country—including a crackdown on sanctuary cities that shield illegal immigrants.

“A nation without borders is not a nation,” Trump said, speaking at the headquarters of the Department of Homeland Security, where he signed the orders.

“Beginning today, the United States of America gets back control of its borders,” Trump said, flanked by Vice President Mike Pence and Homeland Security Secretary John Kelly. “I just signed two executive orders that will save thousands of lives, millions of jobs, and billions and billions of dollars.”

Building a wall at the border was central to Trump’s presidential campaign.

The 2006 Secure Fence Act, passed by Congress and signed by President George W. Bush, already authorizes construction of a wall or other barriers along at least 700 miles of the border. The question remains how to pay for the wall—at least in the short term.

Trump’s first executive order addresses the border, and is primarily about the wall. The second addresses enforcing immigration laws inside the country.

The order on the wall says, in part:

The secretary [of homeland security] shall immediately take the following steps to obtain complete operational control, as determined by the secretary, of the southern border:

(a) In accordance with existing law, including the Secure Fence Act and [the Illegal Immigration Reform and Immigrant Responsibility Act of 1996], take all appropriate steps to immediately plan, design, and construct a physical wall along the southern border, using appropriate materials and technology to most effectively achieve complete operational control of the southern border …

Trump maintains that Mexico will pay for the wall, in the long term, but he will need a more immediate appropriation from Congress. Two ways of doing this would be reducing foreign aid to Mexico, and obtaining revenue through withholding remittance.

“All he is doing is enforcing the law, with the wall, which was passed with bipartisan support,” James Carafano, vice president of the Davis Institute for National Security and Foreign Policy at The Heritage Foundation, told The Daily Signal. “I don’t see a lot to be excited about on this.”

In furtherance of this policy, the attorney general and the secretary [of homeland security], in their discretion and to the extent consistent with law, shall ensure that jurisdictions that willfully refuse to comply with 8 U.S.C. 1373 (sanctuary jurisdictions) are not eligible to receive federal grants, except as deemed necessary for law enforcement purposes by the attorney general or the secretary.

Leaders of several large sanctuary cities—such as New York, the District of Columbia, Los Angeles, Chicago, and Boston—have said they would continue not to challenge illegal immigrants even if this meant losing federal funding.

The issue of sanctuary cities came to the forefront in 2015 in San Francisco, after an illegal immigrant shot and killed Kate Steinle, 32, on a popular waterfront pier.

“If people understand they won’t be protected by local governments, or that they are not going to receive benefits and services from illegally coming to the United States, they are more likely to make a rational decision it isn’t worth the risk,” Mehlman told The Daily Signal.

The executive order on enforcement of immigration laws also: