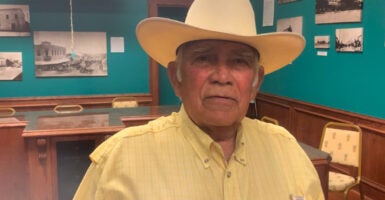 “Because of the amounts of money they make,” Texas rancher Ruperto Escobar says, Mexican drug cartels "control so much of what is happening on our border.” (Photo: Fred Lucas/The Daily Signal)

RIO GRANDE CITY, Texas—It was about 10 p.m. when Ruperto Escobar and one of his ranch hands were surprised to come across two men carrying AK-47s on Escobar’s land, men they believed to be members of a Mexican drug cartel.

“You need to leave this property,” one of the gun-wielding intruders said, according to Escobar. “This property tonight belongs to us.”

Escobar and his ranch hand left. His employee asked whether they would call the Border Patrol to report the two men. Escobar, who has ranched his entire life, said no.

It would be obvious who made the call, Escobar thought, and the 78-year-old rancher didn’t want to be a target.

“Even though it’s my property, of course we had to leave,” Escobar told The Daily Signal. “That night, my [water] pump ran until it ran out of fuel. The next day, you could hear the frogs crawling all over the place. There was an excess of water all over my field. That does not happen regularly. We control the water flow pretty well.”

Escobar, whose 600-acre ranch is located in the small Texas city of Escobares near the Mexican border, spoke with a group touring the Rio Grande Valley with the Center for Immigration Studies, a think tank that advocates strong enforcement of immigration laws. The Daily Signal is part of that visiting group.

“It has gotten out of hand,” Escobar said of illegal border crossings, in an interview with The Daily Signal after speaking to the group. “The cartel power, they have made so much money with all this illegal trafficking, not only of drugs but of humans.”

“Because of the amounts of money they make,” he said, “they control so much of what is happening on our border.”

It had rained the night before, and Escobar met the group Tuesday at the Kelsey Bass Museum and Event Center here in Rio Grande City, about 10 miles from his ranch.

Besides ranching, Escobar has taught high school agriculture, biology, and chemistry. The city of Escobares is named for his family, which traces its local ties to a 1767 Spanish land grant.

Escobar said border crossings have become chaotic, and that he supports finishing construction of the partially built barrier along the Texas-Mexican border.

According to U.S. Customs and Border Protection, in March the Border Patrol encountered 221,303 illegal aliens along the southern border, a 33% jump from February. Of that total, 28% were individuals the Border Patrol had encountered at least once before in 2021, compared to an average one-year “reencounter” rate of 14% during fiscal years 2014 through 2019.

“One of the worst things I’ve seen here lately is the influx of illegals coming across our properties,” the rancher said. “Those guys have done the majority of damage to me, because they have knocked down my gates and knocked everything down in their way. They just created a lot of havoc.”

“We should enforce the security of our border to the maximum,” Escobar said of national immigration policy, adding:

We should finish building that wall. That wall may not stop everything. But that wall is going to slow them down to where our Border Patrol, and other agencies that are important for our border security, they can have time to get to it.

Because that 30-foot wall is not going to be climbed very easily. They put so much concrete under there that they are not going to dig underneath it. So, we need a good wall and then we need all the other technology that is available to us—drones, other things of that nature.