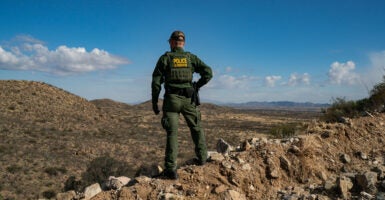 The Biden administration is undercutting border enforcement during a historic surge of illegal immigration— causing all sorts of mayhem and forcing the American people to pay the price. Pictured: A U.S. Border Patrol agent looks for illegal aliens that crossed the southern border near Sasabe, Arizona, on Jan. 23. (Photo: Salwan Georges, The Washington Post/Getty Images)

A disaster is looming.

President Joe Biden appears to be going full steam ahead on ending Title 42. This is the health policy, created in the 1940s and implemented by the Centers for Disease Control and Prevention under President Donald Trump, that allowed the swift deportation of illegal immigrants during the pandemic to prevent the further spread of COVID-19.

It has been one of the few things keeping the exploding southern border numbers under even the slightest control during the Biden presidency. The administration announced it would end Title 42 on May 23, but according to Fox News correspondent Bill Melugin, it is starting to peel it away even sooner.

“In total, there were 221,303 encounters along the southwest land border in March, a 33 percent increase compared to February,” the agency reported. “Of those, 28 percent involved individuals who had at least one prior encounter in the previous 12 months, compared to an average one-year re-encounter rate of 14 percent for FY2014-2019.”

Of course, many others came through without being apprehended.

The March numbers are the highest monthly total in two decades. And this is before Title 42 is set to be discontinued.

It’s not just raw numbers of illegal border crossers that’s worrying. According to the agency, over 40 migrants on the terror watchlist have been apprehended since Biden became president. These are people who have been known to be involved in or are “reasonably suspected” of being involved in terrorist activity.

The U.S. Border Patrol is already swamped. In March, Customs and Border Protection estimated that, in addition to the over 221,000 encounters, over 60,000 border crossers slipped through without being apprehended—about 2,000 per day. Drastically increasing the total numbers of those attempting to cross the border—which will inevitably happen if Title 42 is rescinded—puts the country at risk that more potential terrorists will slip through.

When Biden was considering ending Title 42, a handful of border state Democrats warned him against it. But now that he’s made the announcement, the list of Democrats in opposition is growing. One of the opponents is Sen. Gary Peters, D-Mich., chairman of the Homeland Security Committee.

Several Republicans on the committee wrote him a letter in early April expressing deep concern about what ending Title 42 would mean for the country. Peters seemed to have been receptive to the message.

“Unless we have a well-thought-out plan, I think it is something that should be revisited and perhaps delayed,” Peters said to reporters, according to The Hill. “I’m going to defer judgment on that until I give the administration the opportunity to fully articulate what that plan is. But I share … concerns of some of my colleagues.”

The entire situation conveys the impression that the Biden administration is reckless and partisan and that it caters to the most extreme voices on its left flank. It’s part of the toothless Caesarism that we’ve become used to over the past year. The administration does its best to create vast restrictions on Americans at home, but does nothing to protect the American people or our interests from threats abroad.

If the administration really does think it is necessary to end Title 42, it could at least show some commitment to options that would help maintain order at the border. Biden has even failed to do that.

Predictably, the administration has chosen to do everything to remove those options, too.

The Biden administration has done everything in its power—or beyond its power—to eliminate the Migrant Protection Protocols—better known as the “Remain in Mexico” policy. The policy, like Title 42, was created under Trump and was designed as an answer to President Barack Obama’s “catch and release” border policy.

The Remain in Mexico policy makes it so asylum-seekers—those claiming to flee war zones, political violence, or persecution—must wait in Mexico while applying for asylum in the U.S. It deters people who may want to come to the United States with bogus asylum claims. Once in the country, many dodge their court dates or never get a court date at all.

Biden ended the Remain in Mexico policy on Day One of his presidency and is now engaged in a legal battle to put the policy entirely off the table.

So, what’s the administration’s plan if it gets its way? The Wall Street Journal editorial board did a good job of explaining what’s on tap:

The administration’s alternative seems to be a new policy that would let federal asylum officers grant residence to most claimants, rather than wait in the queue for Justice Department immigration judges. The asylum officers approve claims at a higher rate than judges, who weigh more seriously whether a claimant is fleeing genuine danger. That message will spread throughout Latin America as further incentive to make the trek and cross the border seeking asylum.

Battling the Remain in Mexico Policy, combined with ending Title 42 and the general lack of support for Border Patrol, suggests that the administration isn’t willing to uphold American law and protect our border.

Instead, it is doing everything in its power to not only keep those floodgates open, but to open them even wider, forcing the American people to pay the price for its recklessness.