Why Illegal Immigrants Are Being Released Without Court Dates 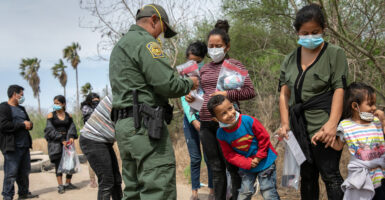 A U.S. Border Patrol agent questions asylum-seekers after the group of illegal immigrants crossed the Rio Grande into the U.S. on March 25 in Hidalgo, Texas. (Photo: John Moore/Getty Images)

Under circumstances at the southern border created by Biden administration actions, the contentious “catch and release” of illegal immigrants has become a bit more complicated, as the Border Patrol is now releasing thousands of illegal aliens into the country without a court date.

Generally, after apprehension, it’s the Border Patrol that processes the illegal border crossers and issues a notice for them to appear in immigration court. However, with the flood of migrants crossing the border, the Border Patrol instead has begun issuing them a “notice to report” to Immigration and Customs Enforcement in 60 days.

Even border hawks are split on its potential effectiveness. A chief complaint is that the Biden administration is engaged in something lacking statutory teeth. On the other hand, the illegal border crossers getting only a “notice to report” will not have an automatic formal status in the country.

Now, if illegal immigrants who are released want the quasi-legal status and benefits of a notice to appear—such as a conditional work permit in the United States—they will have to report to ICE before awaiting adjudication of their asylum claims.

“When [illegal immigrants] don’t have a notice to appear, they don’t have any legal status,” Mark Morgan, former acting commissioner of Customs and Border Protection in the Trump administration, explained to The Daily Signal. “The Border Patrol is overwhelmed. The Biden administration caused this crisis.”

Under catch and release, when the Border Patrol issues a notice to appear for a future date in immigration court, the overwhelming majority of illegal immigrants do not complete the court and adjudication process, said Morgan, now a visiting fellow for national security and foreign policy at The Heritage Foundation, the parent organization of The Daily Signal.

“A good percentage show up for the master hearing. But an overwhelming majority don’t follow through the process. In the end, the [notices to appear] are useless,” he said. “Now, to have a notice to report to ICE, it puts the onus on the illegal immigrant to get the status.”

However, Andrew Arthur, a former immigration judge and Justice Department lawyer, said he wonders whether ICE is aware of the immigrants being released, and he wants to know the report rate.

“The entire system is turned on its head with catch and release. This is the definition of open borders,” said Arthur, now a resident fellow in law and policy for the Center for Immigration Studies, a pro-border enforcement research institute. “The Biden administration has forced the Border Patrol into a bad situation of just managing decline. I don’t blame the Border Patrol. This is just an indication of a system in collapse.”

Arthur said releasing immigrants before giving them a statute-based notice is important, adding that most illegal immigrants show up at least for the initial hearing to attempt to win their asylum case to gain permanent status.

There is some motivation for an illegal immigrant to report to ICE, but the process is still not in federal statute, contends Chuck DeVore, vice president of national initiatives for the Texas Public Policy Foundation.

“There is no basis in statute. This is extralegal,” DeVore, a former California state Assembly member, told The Daily Signal. “It is clearly done to prevent large backups at the border. A notice to appear requires time and cooperation with the immigration court for a date. … Previously, before the rush, Border Patrol could fingerprint people, get photographs, and DNA tests to affirm they are who they say they are.”

A notice to appear in immigration court allows an illegal immigrant to get a conditional work permit while awaiting adjudication of his or her case, DeVore explained.

“The only motivation they have is if they can report for a work permit,” he added. “If that’s the case, they can go to an immigration court and say they have been in the United States for five years, integrated into the community, and a judge will take that into account, even if that person has no legitimate claim to asylum.”

In May, Troy Miller, the acting commissioner of U.S. Customs and Border Protection, told the House Appropriations subcommittee on homeland security that the Border Patrol still collects biometrics and facial recognition when issuing notices to report.

“This is not a decision we made lightly … given the capacity in our facilities and the need to decompress our facilities, to keep not only the folks in our custody safe, but to keep our agents and officers safe,” Miller told the House panel.

He later added, “The notice-to-report process cut the paperwork in half. But let me clear up some misconceptions about the notice to report. Agents perform the same national security and border security checks they do as they would with notice to appear.”

Among the first lawmakers to bring up the issue was a Democrat, Rep. Henry Cuellar of Texas, who complained in March that Customs and Border Protection had already released 2,000 illegal immigrants into the United States without a court date, 150 of those over a weekend.

Customs and Border Protection did not respond to The Daily Signal’s inquiry for this story by publication. But in April, the CBP told The New York Post in a statement that family units were not given court notices.

“The process for providing someone with a Notice to Appear (NTA) frequently takes hours, which contributed to overcrowding in some Border Patrol facilities,” the statement to the Post said, later adding, “To reduce confusion, beginning on March 24, CBP included a notation on the form providing these individuals with a notice to report to an ICE office to commence their immigration proceedings.”