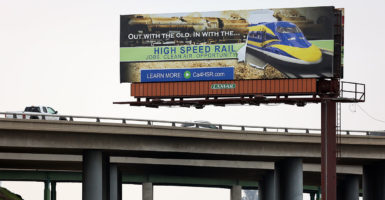 Cost projections for California's high-speed rail line more than doubled to $77 billion last year, and what was supposed to be an example for other states to follow became derided as the “train to nowhere.” (Photo: Al Seib/Los Angeles Times via Getty Images)

Democratic California Gov. Gavin Newsom’s plan to finish the 119-mile stretch of high-speed rail in the Central Valley is expected to cost $10.6 billion, according to official estimates—or $89 million per mile.

Newsom said in a Tuesday press conference that finishing that stretch of line was about “economic transformation and unlocking the enormous potential of the Valley.”

California voters approved a bond to build the high-speed rail line in 2008. The plan was to connect major urban centers from San Francisco to San Diego on a single line, which was expected to cost $33 billion.

But, as with most government projects, delays set in and costs ballooned. Cost projections more than doubled to $77 billion last year, and what was supposed to be an example for other states to follow became derided as the “train to nowhere.”

Newsom abandoned plans to finish the entire high-speed rail line, instead only committing to complete the Central Valley portion already under construction. State officials reported last year the cost of finishing the Bakersfield-Merced stretch is “now estimated at $10.6 billion,” and the project would be completed in 2022.

“Abandoning high-speed rail entirely means we will have wasted billions of dollars with nothing but broken promises and lawsuits to show for it,” Newsom said, adding that not finishing the stretch of line would also mean the state would have to repay the federal government.

“I am not interested in sending $3.5 billion in federal funding that was allocated to this project back to Donald Trump,” Newsom said.

However, finishing that short stretch of high-speed rail line is projected to cost nearly four times what it would take to erect barriers along the U.S.-Mexico border on a per-mile basis.

President Donald Trump asked Congress in December for $5 billion to build 215 miles of border wall, which precipitated the longest federal government shutdown in history. On a per-mile basis, the wall would cost $23 million per mile.

Congress reached a tentative deal Monday night to give Trump just “$1.375 billion for 55 new miles of fencing in Texas,” according to Bloomberg. If true, the per-mile cost of building 55 miles of border wall would be $25 million.

Trump, however, said he was “not happy” with the bipartisan bill, though he did not rule out signing it to avert another government shutdown.