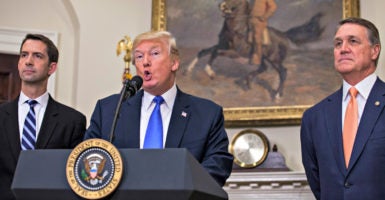 President Donald Trump, who already has taken executive actions to stem the flow of illegal immigrants, on Wednesday put the weight of the White House behind a bill to begin to modernize the nation’s immigration system by favoring new entries who bring needed skills to America.

Trump announced he is backing legislation co-sponsored by two Republican senators that would end the practice of “chain migration,” which gives priority to admitting relatives of immigrants who already are here legally.

However, most Democrats and some Republicans could be skeptical about backing a bill that limits legal immigration.

Sens. David Perdue, R-Ga., and Tom Cotton, R-Ark., appeared with the president at the White House to promote their bill, called the Reforming American Immigration for Strong Employment Act, or RAISE.

“The RAISE Act will reduce poverty, increase wages, and save taxpayers billions and billions of dollars,” Trump said in the Roosevelt Room, flanked by Cotton and Perdue. “It will do this by changing the way the United States issues green cards to nationals from other countries.”

Trump, who won the White House in part because he campaigned on cracking down on illegal immigration, talked in February about a more skills-based system of legal immigration during his address to a joint session of Congress.

The president contends the change would raise America’s global competitiveness and help to increase wages. Although his focus during the presidential campaign was on combating illegal immigration, he now is supporting a bill that would curb legal immigration.

This policy has placed substantial pressure on American workers, taxpayers, and community resources. Among those hit the hardest in recent years have been immigrants and, very importantly, minority workers competing for jobs against brand-new arrivals and it has not been fair to our people, to our citizens, to our workers.

The U.S. needs to move forward on a 21st century immigration system, said James Carafano, a vice president for national security issues at The Heritage Foundation who has worked on border and immigration policies for many years.

“The RAISE Act seeks to reduce low-skill immigration, which is very costly to U.S. taxpayers, while promoting a modernized, skills-based migration system that makes sense for all Americans,” Carafano said. “We look forward to Congress rolling up its sleeves and delivering legislation that establishes a legal immigration system designed for the demands of the 21st century.”

The competitive application process would favor applicants who can speak English and financially support themselves, the president said.

“This legislation demonstrates our compassion for struggling American families who deserve an immigration system that puts their needs first and that puts America first,” Trump said. “The reforms in the RAISE Act will help ensure that newcomers to our wonderful country will be assimilated, will succeed, and will achieve the American dream.”

Cotton and Perdue stressed that the system they propose is based on immigration systems in Canada and Australia.

The senators said they hoped to garner bipartisan support, noting that in the past Democrats were willing to support similar language as part of larger, failed bills addressing both legal and illegal immigration.

“We expect to have Democratic and Republican support,” Cotton told The Daily Signal in a press gaggle outside the White House, adding:

We all know the immigration system hasn’t worked for Americans in a long time. We failed as a Congress in 2006, 2007, [and] 2013 to do everything under the sun on immigration. That’s in part because the American people don’t have confidence in Washington to deal with immigration. That’s why 60-70 percent of Americans favor the principles behind this bill. What we can do is take commonsense and incremental steps to give the American people confidence that Washington is finally looking out for their interests.

It would be surprising if more than a few Democrats support this bill, which about half of Republican senators likely will oppose, predicted Alex Nowrasteh, an immigration policy analyst with the Cato Institute, a libertarian think tank.

Nowrasteh noted that Congress restricted some form of legal immigration in 1882, 1924, and 1964 in hopes of raising wages, and failed each time. He said the Cotton-Perdue bill wouldn’t create the skills-based immigration system that supporters assert.

Cotton and Perdue say the aim of the legislation is to reduce overall immigration to 637,960 in the first year after enactment and to 539,958 by the 10th year. This would mark a 50 percent reduction from the 1.05 million immigrants who arrived in the United States in 2015.

It would be a return to historical immigration norms in America, the senators say, and would help increase American wages.

The legislation would retain immigration preferences for the spouses and minor children of U.S. citizens. However, it would eliminate preference for extended family and adult members.

It would eliminate 50,000 visas per year by doing away with the “diversity lottery,” which critics say advances neither economic nor humanitarian interests. Most of the legal residents in the country under the lottery come from Europe, Cotton noted, so it’s not really diverse.

But Ira Mehlman, spokesman for the Federation for American Immigration Reform, said his organization long has supported shifting to this approach.

“This policy restores some level of public interest to a public policy,” Mehlman told The Daily Signal. “Politicians keep saying they want to reform immigration without saying what the objective is. This has an objective.”

Perdue also said, in response to a question from The Daily Signal, that he believes the legislation should be able to win Democrats’ support, even in a polarized Washington, largely because the same system worked effectively in Australia and Canada.

“We don’t like the current environment right now. Nobody does,” Perdue said. “But why wouldn’t you support this? It’s pro-growth, it’s pro-worker, and it has absolutely been proven to work. This is not an experiment. This has already been proven to work. So I’m anxious to have this dialogue with people in both parties.”

“Legal immigration reform has been off Washington’s to-do list far too long,” he said, adding:

Heritage has long argued for legal immigration policies designed to serve America in the 21st century, not the 19th. We have long favored ending blanket chain migration, and replacing it with a rational, skills-based migration system. We have looked at the lessons from the Canadian and Australian models for reform to see which aspects might better improve the United States’ immigration system.