Schumer, Who Voted for Border Wall in 2006, Threatens Government Shutdown Over Funding It 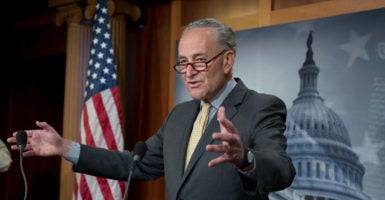 Senate Minority Leader Chuck Schumer is threatening a government shutdown if funding for a border wall is included in a must-pass government spending bill.

“If Republicans insist on inserting poison pill riders such as defunding Planned Parenthood, building a border wall, or starting a deportation force, they will be shutting down the government and delivering a severe blow to our economy,” Schumer, D-N.Y., said in a statement, according to Bloomberg.

Funding for the federal government will run out during the last week of April and in order to avoid a government shutdown, Congress must pass a spending bill by April 28.

In 2006, Schumer was among 26 Democrats who voted for the Secure Fence Act of 2006 that was passed by both chambers of Congress and signed by President George W. Bush on Oct. 26, 2006.

This nation was built by immigrants. They will always be welcome here. #NoBanNoWall #JointAddress pic.twitter.com/varjEOG3BX

The goal of the Secure Fence Act was to “protect the American people,” and “make our borders more secure,” said Bush in a statement.

A new letter signed by Schumer said that provisions such as funding for a border wall should not be included in the appropriations bill.

“We believe it would be inappropriate to insist on the inclusion of such funding in a must-pass appropriations bill that is needed for the Republican majority in control of the Congress to avert a government shutdown so early in President [Donald] Trump’s administration,” the letter said.

The letter was directed to Senate Majority Leader Mitch McConnell, R-Ky., and Sen. Thad Cochran, R-Miss., chairman of the Senate Committee on Appropriations.

Sixty votes are needed to pass the bill in the Senate. Since there are 52 Republican senators, McConnell will need at least eight Democrat votes.

“We are also concerned with reports that there may be effort to include funding for a very expensive new wall along the southern border with Mexico and a ‘deportation force,’” the letter stated.

In 2013, Schumer spoke against Sen. Ted Cruz, R-Texas, and Cruz’s efforts to, according to Schumer, “hold the American people hostage until everyone agrees with his view.”

In 2013, Cruz tried to block funding for Obamacare in a must-pass spending bill, resulting in a partial government shutdown.

“He wants to hold the cancer patient hostage who won’t get [National Institutes of Health] treatments if the government shuts down,” Schumer said of Cruz, adding:

He wants to throw the construction worker out of work who is doing a job that is federally funded and won’t be funded if the government shuts down. He wants to tell the recipients of Social Security that they may not get their checks if there aren’t enough people at the centers to send those checks and make sure they get to the right place, because he wants to shut the government down.

Dan Holler, spokesman for Heritage Action for America, the lobbying affiliate of The Heritage Foundation, told The Daily Signal in an email that Schumer’s double standard should send a message to the American people.

“What a difference a decade makes,” Holler said. “Sen. Schumer’s refusal to provide funding for a law he previously supported is not surprising but it is revealing. Schumer and his colleagues seem intent on resisting President Trump even if it means flip-flopping on past positions and fighting against the very votes that delivered a decisive outcome in November.”