Mattis Is Punting the Military Buildup to 2019 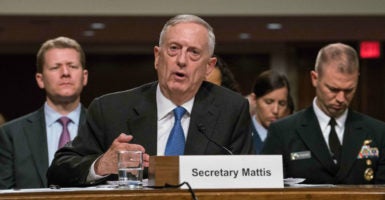 In accord with the president's budget, Secretary of Defense James Mattis told committee members that the military buildup will start in fiscal year 2019. (Photo: Ken Cedeno/Zuma Press/Newscom)

Secretary of Defense James Mattis has news for Congress and for the nation: The military buildup will have to wait until next year.

Mattis delivered that message in a back-to-back series of appearances before Congress, one of them taking place in a rare prime-time hearing on Monday night.

During both testimonies—which were delivered before the House and Senate armed services committees, respectively—Mattis told the Congress that the military buildup promised by President Donald Trump will have to wait until next year. He stressed that while rebuilding the size and capabilities of the military is important, the 2018 defense budget request will focus primarily on addressing near-term readiness problems.

Mattis’ message to both the House and Senate contained two themes: that the 2018 budget is simply intended to fill holes in readiness, and that the promised rebuilding of the military will not take place until 2019.

Responding to multiple questions from lawmakers, Mattis stated that the proposed budget for 2018 will start to “fill the holes and achieve program balance before beginning to significantly grow capacity in future years.”

Testifying alongside Mattis, Joint Chiefs of Staff Chairman Gen. Joseph Dunford explained that there are severe readiness shortfalls in every single branch of the military.

Due to limited resources in recent years’ defense budgets, the services have been forced to prioritize short-term readiness while decreasing the long-term preparedness and modernization of America’s armed forces.

Dunford pointed out, for instance, that the Marine Corps has delayed planned investments in multiple elements, from infrastructure to aircrafts, all to preserve the immediate proficiency of that service’s currently deployed forces.

Mattis pointed out that the readiness crisis is a result of high operational tempo—over 16 years of war—but also of consistent failure by Congress to support the military. That failure is reflected in nine years of continuing resolutions and four years of funding under the budget caps adopted in the Budget Control Act of 2011.

In a dramatic moment in one of the hearings, Mattis stated, “We did not get into this situation in one year, and we won’t get out of it in a year either.”

It will take many years of sustained budgetary growth to rebuild the military—an assessment that is shared by The Heritage Foundation.

Mattis stated multiple times that the next five budgets will have to show considerable increases—he mentioned growth rates of at least 5 percent—in order to rebuild the military to the degree Trump has said is necessary.

Mattis, speaking of the future budget request, made a clear projection:

The fiscal year 2019 budget, informed by the National Defense Strategy, will grow the all-volunteer force. The department will work with President Trump, Congress, and this committee to ensure the budget request we present for fiscal years 2019-2023 is sustainable and that it provides the commander-in-chief with viable military options in support of America’s security.

Mattis indicated he expects the defense budget to grow by 3 to 5 percent over the next five years in order to accommodate necessary increases in personnel and procurement.

Nonetheless, these projections for 2019 and beyond were not part of the president’s budget request for this coming year. In fact, the five-year projection typically included in defense budget requests, referred to as the “Future Years Defense Plan,” was absent.

Instead, Department of Defense officials have stated that future projections included in the 2018 request are not representative of their planning, but rather are just projected growth in light of inflation.

>>> Defense Leaders Agree: US Military Readiness Is at a Dangerous Low

The Heritage Foundation has outlined in multiple documents that there is a need to start rebuilding our military immediately. Heritage’s Index of U.S. Military Strength has highlighted for three years the need for Congress to make the defense budget a priority.

Congress should heed the warnings being issued by both Mattis and Dunford to prioritize our national defense.

Now that the president’s budget request is public, it is Congress’ responsibility to address how to increase defense spending. There is widespread agreement that the military needs resources to rebuild both immediate readiness and the long-term health and capacity of the military.

Mattis starkly highlighted the legislative branch’s role in funding the military, stating, “Congress as a whole has met the present challenge with lassitude, not leadership.”

Congress now has a chance to show the leadership that the secretary called for and that the country needs. It can do so by increasing spending for defense this year and into the future.

The lists of unfunded requirements that the military services by law were required to submit are excellent places to start.