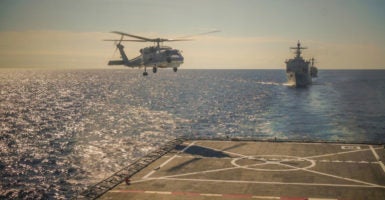 President Donald Trump delivered his 2018 budget request to Congress on Tuesday, and as expected, the defense portion is not enough to initiate the military buildup that the president had called for.

Aligning closely with the president’s so-called “skinny budget” issued earlier this year, this proposal calls for $603 billion in base defense discretionary spending and $65 billion for overseas contingency operations.

While this is a $54 billion increase over the spending levels mandated by the 2011 Budget Control Act, it is actually only a timid $16.8 billion (or 3.3 percent) increase over President Barack Obama’s budget plan.

The president’s low-ball budget request may have fallen into the “wait-and-see” trap described by Thomas Spoehr in The Hill. As Spoehr notes, some are inclined to hold off on boosting military spending until the administration completes its defense strategy review.

But as Spoehr points out, that view is misguided:

Some might argue that military rebuilding should wait until the new administration completes its defense strategy review. But that argument overlooks just how far the military has sunk in terms of size and capability. The military is in such a deep hole, there is no reasonable danger that, by starting to rebuild now, the nation will “overshoot” the target and acquire more capability than it could possibly need.

Yet the president’s budget adopts this wait-and-see strategy, asking for a small increase for fiscal year 2018 while increasing projected defense funding over the next decade only at the expected rate of inflation, 2 percent.

The document actually states that the numbers for the defense budget beyond 2018 should not be considered “a policy judgement.”

This is cause for both hope and concern.

The request is concerning because it might indicate that the administration does not yet fully grasp what resources are required to fulfill Trump’s promise of rebuilding the military. Maintaining the status quo is not a recipe for success in this endeavor.

As The Heritage Foundation’s Index of U.S. Military Strength illustrates, the size, capabilities, and readiness of all the armed services have been declining for years.

For instance, only one-third of Army forces were ready for action in April 2016, and the Navy is not on course to meet its desired 355 ships. The Air Force is also struggling, as it faces a shortage of 700 fighter pilots and 4,000 maintenance personnel.

But there is also cause for optimism in this request, as it demonstrates that the Trump administration is willing to put in the effort to better understand the needs of the military and what it will take to begin rebuilding it.

Even as the administration waits for the new National Security Strategy, the new National Defense Strategy, and the Nuclear Posture Review, the service chiefs of the military and members of Congress can help inform the discussion.

Rep. Mac Thornberry, R-Texas, and Sen. John McCain, R-Ariz., have both put forward budgetary solutions that recognize the reality of the challenges facing the armed services. Heritage Foundation experts have also shown a path forward to begin rebuilding the military.

All in all, the proposed budget for the military is a step toward rebuilding our military—albeit a timid step. It will take more work and resources for Trump to be able to fulfill the promise of a historic military buildup.