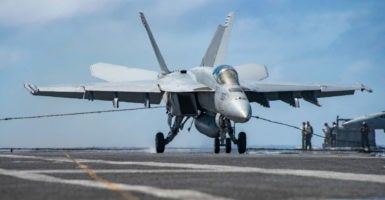 The sizes of the U.S. Navy, Army, and Air Force all currently stand at historic lows. (Photo: Castellano/U.S. Navy/SIPA /Newscom)

On Monday, President Donald Trump’s budget director, Mick Mulvaney, announced that the administration will seek a defense budget of $603 billion for 2018—“one of the largest increases in history.”

Trump said nondefense spending would be cut by an equal $54 billion, “the largest proposed reduction since the early years of the Reagan administration.”

The White House characterized the defense bump as a 10 percent increase. Both the percentage increase and the $54 billion figure refer back to the 2011 Budget Control Act caps for fiscal year 2018, which is $549 billion.

As is typical in Washington, nearly everyone can find something to be unhappy about in this proposal. As in most cases, the reality lies somewhere in the middle.

Reasons to View This Announcement Positively

As The Heritage Foundation reported in our 2017 Index of U.S. Military Strength, in the last five years, as a result of a diminishing budget and equipment overuse, the military has been sorely depleted. The Army is smaller than it has been since World War II, the Navy the smallest since World War I, and the Air Force the smallest since its existence.

And it’s not just smaller—it’s less ready. As the military service vice chiefs of staff testified in January, only three of the Army’s brigade combat teams are ready to fight today, one-quarter of Navy aircraft are flyable, and the Air Force is suffering from crippling pilot and maintenance personnel shortages.

Major weapon systems are also aging and not being replaced. The average age of Air Force aircraft is 27 years old, and the Army does not have the ability to replace its main battle tank, which is already 37 years old.

In real constant dollars, the Department of Defense’s budget has declined by 24 percent since 2011. By any measure, America is not spending enough to sustain its military in these times of increasing global threats.

But this increase on its own is insufficient to begin the rebuilding. It simply represents an “on-ramp” to rebuilding.

The Obama administration had already planned to spend $584 billion in 2018 on defense, and the military services have already prepared detailed plans to spend that amount.

A 2018 budget of $603 billion represents an increase of 3 percent, not 10 percent, over the previous administration’s plans. An $18 billion increase will not be enough to regrow the military, rebuild near term readiness, and commence needed modernization programs.

And this recent announcement did not mention the 2018 “overseas contingency operations” account request, which must remain relatively the same as 2017’s in order to make real progress.

Heritage recommends a 2018 defense budget of $632 billion, with the additional implementation of $14 billion in savings we have proposed through various initiatives as well as a similar level of funding for overseas contingency operations.

Fully rebuilding the military will probably require more than can be reallocated from just discretionary spending, and in future years, more sources will be required.

Both Sen. John McCain, R-Ariz., and Rep. Mac Thornberry, R-Texas, have correctly pointed out that this 2018 budget will not be sufficient to rebuild the military. Hopefully, working together, Congress and the administration can provide the necessary funds in 2018 and beyond to begin rebuilding the military.

In sum, the announcement of an increased defense budget for 2018 is good news for our military and nation. The deterioration of our armed forces did not happen overnight—it occurred over years, and to now rebuild it will similarly take years.

The president’s proposal is a welcome and necessary first step in that process, but more will be needed.