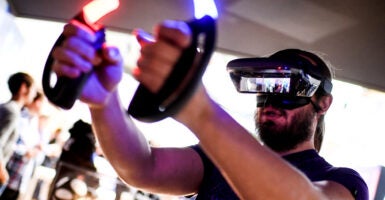 The video game industry is driving rapid changes in society, and is even producing some startling innovations in warfare. Pictured: A visitor at the IFA technology trade fair in Berlin uses a virtual reality device on Sept. 6, 2019. (Photo: Britta Pedersen/Picture Alliance/Getty Images)

From Call of Duty to Minecraft, virtual spaces are where more and more people are spending a good amount of their lives. Facebook’s plan to create a metaverse—a sort of next-generation internet that promises to blur the line between the actual and virtual worlds even further—raises valid concerns. And yet, the demand for virtual environment is only growing.

In fact, Investopedia reports that the video game industry is larger than both the movie and music industries combined. It has become an incubator for technology that is changing how people socialize, communicate, and even wage war.

To understand how the video game industry is changing society and is even driving innovations in warfare, The Daily Signal spoke with defense experts at The Heritage Foundation—James Carafano, Dakota Wood, Dean Cheng, and John Venable—to hear what they have to say about the video game industry. Here are their thoughts.

The Daily Signal: Why should defense experts be interested in the video game industry?

Dean Cheng: The technology that we are talking about has long exceeded gaming.

It’s a huge industry. It bankrolls technological developments that are widely used in military training now. While simulators still won’t replace actual flying time, it does help to augment and supplement flight training. It’s also increasingly used, as I understand it, in mission planning.

Dakota Wood: I don’t do any gaming myself but I thoroughly track advancements in simulations, virtual reality, the emerging area of augmented reality, and now the metaverse. There is a huge audience for drone racing, in which the “pilots” use VR headsets to get their drone’s perspective in flying courses.

The military services are heavily invested in multiplayer gaming-type simulations for training—Army, Marines, SOCOM—in ground applications, and the air community uses it to train in multi-aircraft scenarios (now pairing manned aircraft with unmanned).

Given the track record of chip processing power jumps and corresponding software development, “gaming” is rapidly expanding beyond Mario.

James Carafano: Since at its core social networking is a human interaction, any technology that enhances human experience in a virtual environment could be significantly impactful in networking warfare.

Virtual environments are, of course, already a thing. Militaries use them for training. Many people experience them through gaming programs. Computer gaming plays as dominant role in modern society as the listening to the radio played in the first half of the 20th century. And as a means of entertainment and education, gaming is eclipsing other forms of popular culture technology, from movies to music.

Since games on and offline mimic human learning processes by teaching through experience, gaming can impact the skills, knowledge, and attributes of networks.

Gaming can be used to teach and modify behavior. Games can help build new skills. They can allow gamers to plan, test, forecast, and assist in performing real-world tasks.

Any technologies that significantly advance the accessing and processing of data—and putting the knowledge in a virtual presence where humans can interact and manipulate it—will change how networking warfare gets done in the future.

Networking warriors that don’t pay attention to these developments will be left fighting the last networking wars—not envisioning how to dominate in the next ones.

The Daily Signal: How will some of the technology that has come out of the gaming industry change warfare?

Carafano: One of the most relevant tech categories here is virtual reality—which is not a single kind of technology but a family of capabilities that create a simulated physical environment, real or imagined. It may include software, sensors, motion detectors, gyroscopes, and visualization and projection technologies.

There is an enormous appetite for these technologies—according to Statista, it’s projected at over $300 billion in 2021.

Although virtual reality technologies are often associated with online gaming, immersive technologies are already widely used in a number of fields, from medical science to military training, engineering, and education.

Ultimately, since networking warfare is primarily a human-to-human activity—technologies like virtual reality augmentation could have a powerful effect.

John Venable: The Air Force tried to develop the capability to link dozens if not hundreds of fifth-generation fighter simulators at multiple bases together with airborne platforms to execute large-force employment packages.

They have run into myriad challenges that have significantly limited those expectations.

The largest issue, as I understand it, is latency—or the delay between a command inputted into a computer and when the action is completed in real time. Networks have inherent latency issues that can be worked out, but the one type of latency they can’t solve is the additional latency that comes from the physical distance between simulator locations and aircrafts.

The gaming industry can, and is very good at, developing latency fixes for all gaming elements in their “simulated” worlds, but doing that with less malleable weapons system elements that must follow real-world rules turns out to be much more challenging.

The gaming industry may help develop a fix or series of fixes that work for those simulators, but in my conversations with folks in the defense industry, they are not optimistic.

Carafano: That’s right—as powerful as these tools are, there are significant challenges to duplicating the real world in virtual space.

Much of the most exciting developments are likely to happen in the commercial sector. Facebook, now called Meta, has bet its future on creating the “metaverse,” a fully collaborative, virtual environment that they anticipate will become as common a platform for social interaction as the internet.

Regardless of how successful they are in realizing their vision, this effort undoubtedly reflects the face of social networking to come.

The Daily Signal: That brings me back to the entertainment side. Video games have clearly been driving a massive societal shift for decades, and it continues to grow exponentially. For example: In 2014, Twitch—a web platform that allows users to stream video of themselves playing video games to followers—was purchased by Amazon for $970 million. What does this say about gaming?

Cheng: It doesn’t surprise me. Games can have huge communities that straddle the globe. EVE Online, a space game, has millions of players. The game has a massive economic component, including millions of dollars of real-world sales for in-game upgrades. In some space battles in EVE, literally hundreds of thousands of real-world dollars’ worth of ships were destroyed.

They also reflect real-world realities. Gamers from the Ukraine and Russia have apparently separated inside of games like EVE Online and World of Warcraft as political tensions between their home countries increase.

Carafano: The gaming industry is something that we need to be paying attention to, because it’s big.

In contrast, global cinema box office receipts in 2020 were about $12 billion.

Millions of people watch gaming influencers on Twitch. This world is bigger than video—and is already transforming entertainment.

Some users on Twitch follow their favorite gamers online who are streaming for up to 10 hours a day. Some online gamers are so consumed by these activities they require mental health services to adjust to normal day-to-day functioning.

Amazon bought Twitch for a billion dollars for a reason.