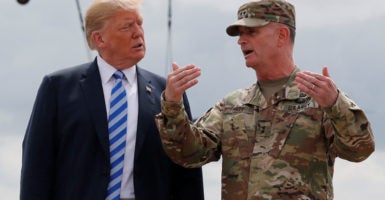 Forty years ago, the bill was 16 pages long and was called the “Department of Defense Appropriation Authorization Act, 1978.” This year’s NDAA is close to 800 pages. The early date is even more impressive considering that the last time that the NDAA was signed into law before the beginning of the fiscal year on Oct. 1 was in 1997.

The early passage of the 2019 NDAA represents a level of stability and predictability uncommon in the recent history of the Department of Defense, and it should be very helpful in the efforts to rebuild our military.

There are two important factors worth noting that contributed to the early timing of the 2019 NDAA: the Bipartisan Budget Act of 2018 and the shadow projected by the absence of Sen. John McCain, chairman of the Senate Armed Services Committee.

The Bipartisan Budget Act has its flaws and represented the capitulation of substantial budgetary controls for 2018 and 2019; nonetheless, it brought a much-needed defense budget increase for both years. The 2019 defense base budget was set at $647 billion, of which a little over $639 billion was under the auspices of the NDAA.

The increased and certain budgetary number removed the biggest point of contention that lawmakers usually have with the NDAA. It enabled both the House and Senate to start working from a common top line and all but eliminated the debates on how to balance defense with other priorities in the budget.

Since late December, McCain has been in Arizona dealing with the effects of the treatment for his brain cancer. In his absence, Sen. James Inhofe, the second-ranking Republican on the committee, has been performing the duties of Armed Services Committee chairman. Still, Inhofe has expressed multiple times that the NDAA and the work of the committee were shaped by McCain.

Naming the NDAA after the absent chairman is a fitting recognition for the senator’s influence and role played in many consecutive bills. It recognizes the importance of his work, not only on the 2019 version of the bill, but in the defense community in general.

Despite all the positive signs that the Fort Drum signing ceremony brings, it is important to highlight that it does not mark the end of the effort to rebuild the military.

It took the military many years to get in a state of deteriorated readiness described by The Heritage Foundation’s Index of U.S. Military Strength. By the same token, it will take time to rebuild it. It is not a two-year effort.

When Secretary of Defense James Mattis was discussing the rebuilding efforts, he mentioned the need for sustained and increased funding at least until 2023 to be able to fully rebuild military capabilities.

The defense budget will require more resources if we are to build out those capabilities to face the threats described by the national defense strategy.

The Budget Control Act caps that limit how much the country can invest in its defense will return in 2020 and 2021. If the country were to observe those caps, it would represent a decrease of $71 billion over the 2019 base budget.

That will require sustained engagement with Congress and the American people to explain and make the case for the defense budget and the military rebuild.

Despite the successes in 2018 and 2019, the American people cannot and should not think that the job is done. It will still take time and resources to rebuild the military that America requires.